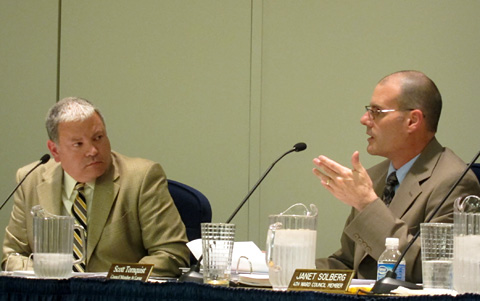 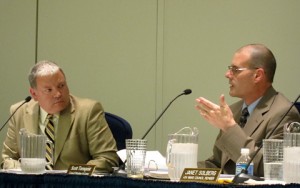 Alliant Energy Representative Jim Collins reminded the council that Alliant paid about $663,000 in taxes to the city last year and roughly $2 million to Cerro Gordo County.  He said Alliant is planning infrastructure upgrades in the city from Taco John’s west to Shopko as well as in the northeast quadrant of the city.  He said they plan to spend about $1 million.

Collins also said Alliant is still in the process of site selection for a new Alliant Energy substation.  They hope to have a site picked out by 2013 and have it operational by 2016.

Much of the council discussion focused on a major project the city is looking into involving Highway 122.  The stretch of highway in question is from Monroe Avenue east to about Carolina Avenue, where the highway is split into one-way streets.  The city is working with the Iowa DOT at possibly eliminating the one-ways.

A study would need to be done first.  The cost to the city is $20,000, which was budgeted last year and still set aside.

The project would cost an estimated $11 million, about 20% of which the City would be responsible for.  City Administrator Brent Trout told the council that dollars are already being set aside to start to cover this cost.  The project would not get started for a number of years, perhaps not until 2016.  There would be property acquisitions and other complications to consider before moving ahead.

At-large Councilman Scott Tornquist wondered if there was really any benefit to doing the project.  “These are pretty significant decisions… that will impact the community for decades,” he said.  He also mentioned that the City is looking at the downtown loop one-ways of Delaware Avenue and Washington Avenue and changing them to two-ways streets.  He thinks the two projects should be coordinated.

Councilman John Lee said he would feel more comfortable holding a work session to digest all the information before OK’ing the traffic study.  The council agreed to postpone a vote on the IDOT traffic study until April 3rd.  A work session will be held next Tuesday, March 27th.  Public hearings on the traffic and street changes are likely in the works, to get public feedback and ideas.  No solid dates were set for those.

The council unanimously agreed to pay a Des Moines company, Quality Striping, $99,915.60 to paint pavement in the city.  City Administrator Trout laid out a litany of reasons for his recommendation, including the cost of equipment and labor, liability (“painting a car” by accident), the City’s inability to get good rates on buying paint, paint spills relating to the Environmental Protection Agency, and the burdens of traffic control.

Councilman John Lee said he would like to explore the possibility of a “hybrid” solution to save costs in the future on this expense.  This would involve contracting out for some of the work and the City handling some of the work.  City workers used to, for years, paint the pavement in the city.

Councilman Alex Kuhn said “I’ll be supporting the local labor force as much as I can… but our only other option is to say ‘no’ and award the contract to Iowa Plains (the only other bidder) at $6,000 more.  I move approval.”  Kuhn did not mention how much time he spent investigating the possibility of using local labor to do the work.

In other business, the Council approved Mayor Bookmeyer’s re-appointments to boards and commissions: Isaiah Schott to the Cemetery Board, Heidi Marquardt to the Planning and Zoning Commission and Walter Schmitt to the Building Advisory and Appeals Board.