Obama raises cash in Chicago as Romney, Santorum scramble for votes in suburbs

This news story was published on March 18, 2012.
Advertise on NIT • Subscribe to NIT 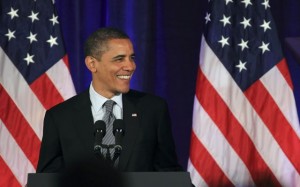 CHICAGO — President Barack Obama made a quick stop in his hometown to pad his campaign account Friday as the two leading contenders in Illinois’ Republican presidential primary hit the suburbs to tout themselves as the best choice to take him on in November.

(PHOTO: President Barack Obama speaks on Friday, March 16, 2012, at a fundraising lunch at the Palmer House Hotel in Chicago, Illinois.)

“(The director) who put it together said, ‘You know, that the hard thing about this documentary was that he could find nothing negative to say about the president.’ He might want to talk to some soccer moms who are having a hard time filling up their car to get their kids to practice,” Romney told supporters at a pancake house in Rosemont.

Santorum criticized the president for his health care plan and accused him of being timid on foreign policy during speeches at two schools in Arlington Heights. At a restaurant near John Hersey High School, Santorum turned his attention to Romney ahead of Tuesday’s Republican presidential primary.

“People know he’s not conservative. People know he’s wrong on the biggest issues of the day that we need to be able to win this election. And I think that’s the reason we’re doing as well as we are,” Santorum told reporters. “We’re the candidate that’s got vision, that’s got momentum.”

Obama, meanwhile, made just a passing reference to his potential Republican challengers as he raised an estimated $2 million during his short stop downtown.

“Now, you might have noticed that we have some guests in Illinois this week. Apparently, things haven’t quite wrapped up on the other side. So there is actually some interest in the primary that we have here on Tuesday,” Obama said at the top of his 30-minute speech.

“And my message to all the candidates is, ‘Welcome to the Land of Lincoln,’ because I’m thinking maybe some Lincoln will rub off on them while they are here,” Obama said.

Tickets for the luncheon of more than 600 attendees started at $2,500, according to a campaign official. Afterward, Obama held a discussion with 60 supporters, for which tickets started at $10,000. The money goes to Obama’s Victory Fund, a joint fundraising committee authorized by Obama for America and the Democratic National Committee, according to the Obama campaign.

The president also acknowledged the enthusiasm gap from four years ago, when he was an upstart U.S. senator trying to win the Democratic presidential nomination.

“It’s not as trendy to be involved in the Obama campaign as it was back then. Some of you have rolled up those ‘Hope’ posters, and they’re in the closet somewhere,” Obama said. “But I am more determined and more confident that what drove us in 2008 is the right thing for America than I’ve ever been before.”

First in town Friday was Romney, who addressed more than 100 supporters gathered outside a Rosemont breakfast spot. The former Massachusetts governor called Obama an “economic lightweight,” saying the president has never worked in the private sector. Romney talked up his business record as well as his work on the Olympics, saying he has real-world experience instead of debating the economy in Congress.

Romney also joked about Chicago’s history of vote fraud ahead of Tuesday’s balloting. “I need you to vote, and by the way you’re allowed to vote multiple times. By getting a friend to go with you,” Romney said. “I know this is Chicago. I had to clarify.”

The Illinois presidential vote is a beauty contest, with GOP primary voters getting to directly elect 54 pledged delegates from the state’s 18 congressional districts.

Santorum acknowledged that he’s at a disadvantage with only 44 delegates on the ballot, but said it’s amazing he has that many given how little campaign infrastructure he had in the state in December, when Illinois delegate petitions were being circulated. “I was driving around in a truck in Iowa in December,” he said. “We got on the ballot because a bunch of folks called our office and said ‘We’d like to help you.’”

On Friday night, Santorum got a prolonged standing ovation from about 800 people at Christian Liberty Academy in Arlington Heights and loud cheers when he mentioned he and his wife had home-schooled their children.

During his speech, two men stood up, yelled something toward the stage, embraced and kissed, then were led from the gym as the crowd first booed then began chanting “USA.”

Santorum paused, then picked up his speech where he left off without addressing the incident.

One Response to Obama raises cash in Chicago as Romney, Santorum scramble for votes in suburbs