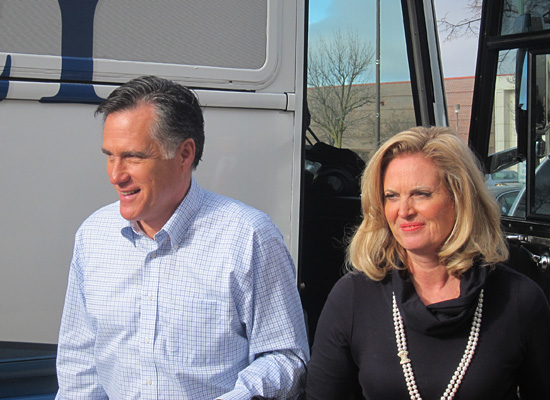 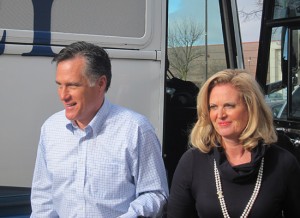 MANCHESTER, N.H. — Mitt Romney rolled to a convincing victory Tuesday in the New Hampshire primary, taking a broad stride toward capturing the GOP presidential nomination as the contest heads south for a pair of potentially make-or-break contests.

The win gave Romney a one-two sweep in the leadoff voting of the 2012 campaign, a first for any Republican apart from a sitting president.

The conservative candidates who stand the best chance to stop him as the race moves next to South Carolina and Florida — former Pennsylvania Sen. Rick Santorum, former House Speaker Newt Gingrich and Texas Gov. Rick Perry — were trailing far back and appeared unlikely to get a significant lift from their performance here.

Rep. Ron Paul of Texas was a solid second and Jon Huntsman Jr. was a weak third, with barely half Romney’s share of the vote. The former Utah governor, who concentrated almost his entire campaign in this state, insisted that he would move on.

But the night belonged to Romney, who lost the state four years ago. He sought to impart an air of inevitability to his candidacy with a celebratory speech Tuesday night that focused more on the fall election than the task of securing his party’s nomination.

“Tonight, we celebrate. Tomorrow, we go back to work,” Romney told a boisterous crowd of supporters in Manchester, less than a half-hour after the polls closed.

The former Massachusetts governor lambasted President Barack Obama, the man he hopes to face in November. But he also took a hard slap at what he termed “desperate” Republican rivals who have stepped up their attacks on his record in private business, a group that includes Perry, Gingrich and Huntsman.

Reading prepared remarks from a teleprompter, Romney said that “President Obama wants to put free enterprise on trial, and in the last few days we’ve seen some desperate Republicans join forces with him.” His backers booed in response.

“This is such a mistake for our party and for our nation,” he continued. “The country already has a leader who divides us with the bitter politics of envy.”

Romney, who flies Wednesday to South Carolina, spoke directly to voters in that state, urging them to make 2012 the year that Obama’s presidency “runs out of time.”

Interviews of voters leaving their polling places showed a broad, sweeping triumph for the GOP front-runner. He carried most age, income and demographic groups as well as voters across almost the entire political and ideological spectrums, including conservative “tea party” supporters.

The runner-up from Texas, greeted with chants of “President Paul” from supporters, said he had placed a congratulatory call to Romney on his “clear-cut victory” but added “we’re nibbling at his heels.”

Santorum, the runner-up by eight votes in the Iowa caucuses, was scrambling along with Gingrich to create some sense of momentum for their campaigns. Perry abandoned New Hampshire, staking his future on South Carolina.

Romney starts out leading there, too, but that challenge promises to be much more formidable than New Hampshire which, from the start, was the former Massachusetts governor’s to lose. Unlike Iowa, where leaders came and went atop the polls, no survey ever showed Romney with less than a sizable, double-digit New Hampshire lead.

In South Carolina, however, Romney won’t have what amounted to a home-field advantage — he became the sixth Massachusetts presidential hopeful to win the neighboring Granite State — and he will face a much different electorate in the first Southern primary next week.

South Carolina has a large and politically important bloc of evangelical voters. Romney will face resistance among some of those Christian conservatives who are suspicious if not downright hostile toward his Mormon faith. In New Hampshire, just 14 percent of those who voted Tuesday said being a “true conservative” was the most important thing to them, trailing far behind the economic concerns cited by 6 in 10 voters, according to election-day interviews by the TV networks.

Romney is also facing a more assertive pack of runners-up.

After largely fighting amongst themselves for the past several months, they took after Romney in New Hampshire with sudden ferocity, ganging up on him in a Sunday debate and pounding him since then over his work at Bain Capital, the private investment firm he co-founded and the source of Romney’s great personal wealth.

While he cites his business background as a virtue, especially in contrast to the extensive Washington resumes of most of his rivals, Romney’s opponents have depicted him as a heartless, job-slashing corporate raider.

He handed them a cudgel while campaigning Monday with a remark — wrenched from its original context — that “I like to be able to fire people.” Although Romney made the comment in regard to health care and holding insurance companies accountable, his rivals seized on it as evidence of his callousness.

Still, Romney moves ahead with many advantages, not least a big edge in money and campaign organization, which become increasingly important as the race shifts from statewide races in Iowa and New Hampshire to a series of big-state contests across the country.

Victories in South Carolina on Jan. 21 and Florida 10 days later could all but ensure that Romney will capture the nomination, and sooner rather than later.