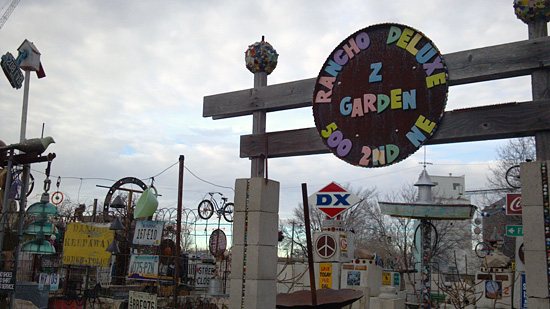 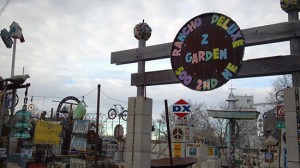 MASON CITY – Max Weaver is no longer a City Councilman, so he is finding new ways to fill his days.

One of his favorite things to do, when he is not chatting up anyone and everyone in town, is to work on his “Rancho Deluxe Z Garden.”

“It took ’em twelve years to throw my ass out, I’m OK with that,” Max Weaver informed NorthIowaToday.com on an unseasonably warm January day.  “I didn’t campaign.”

Weaver was at his garden, located just east of Good Shepherd Nursing Home on 2nd Street NE, all weekend, toiling away, moving 4000 pound blocks of concrete.  He had the help of a forklift and four young men, including his son Ruben and former Mohawk track star Coty Thompson. 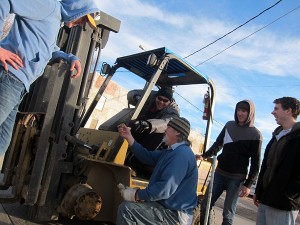 “We put in a few hours each day over here,” Thompson said.  Weaver treated the guys to a lunch at the Suzie Q for their help.

At Rancho Deluxe, Weaver created a stage, surrounded by “artwork” of all kinds.  Old bicycles of every shape, size and age are hoisted onto the tops of walls, made up of the concrete blocks, two high.  You will find signs that he has acquired throughout the garden.  There is a bathtub full of bowling balls on top of another wall.

On Friday, Weaver and his crew were busy creating a “room” by re-arranging the blocks.  Their progress was stalled by a blown-out tire on their forklift, which they had fixed later that evening.  The room is next to the stage, where people can congregate and talk, Weaver said.

“Anyone can talk on my stage, say anything they want, there is no time-limit,” he said. “Once you are off the stage, that’s it, the debate is over, you get it all of your chest there.”

Weaver routinely has pedestrians and bicyclists pass through his garden.  “They’re all welcome here,” Weaver said.  A young lady and a small child strolled through the garden and took their own tour of the place.  An older lady on a bike also stopped and chatted.  “In warm weather, they are here all the time.”

As for his future plans, Weaver said he just wants to work on his garden.  “I have water, and electric service ready to go,” he said.  “Maybe I will serve hotdogs here in the summer, invite bands to play.  Hold debates.  Anything’s a possibility.” 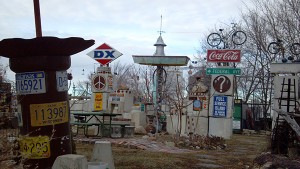