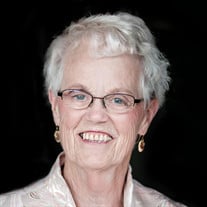 On February 14, 1955, Jan was united in marriage to LeRoy (Lee) Hinrichs in Monticello, Iowa. To this union they were blessed with 2 children, Terry & Leanne. The Hinrichs family resided in Monticello, Iowa until July of 1969 when Lee & Jan moved their family to Hampton, Iowa. Jan worked at Hampton Publishing for many years. In 1978, Lee & Jan purchased Trails End Lodge fishing resort in Canada which they operated until 1994. Upon returning to Hampton, they owned and operated the Squaw Creek General Store & General Store Marketing & loved renovating old homes. In later years, Jan worked for Leanne in her business. She was a long-time member of St. Paul Lutheran Church in Hampton, Iowa, served on many committees and loved her church family & was a former PEO member. Jan thoroughly enjoyed gardening and was a fantastic cook, she made sure no one ever left with an empty stomach. She enjoyed spending time with her family, including the grandchildren and great-grandchildren who gave her a lot of joy. Later in life, her sense of humor could really make the great-grandchildren laugh. She will be greatly missed by her friends and family.

Memorial contributions may be sent to St. Croix Hospice or St. Paul Lutheran Church in Hampton in memory of Janet.