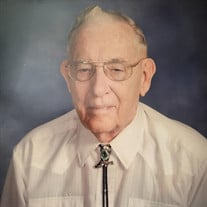 A funeral mass will be held 10:30 a.m., Wednesday, December 7, 2022, at Epiphany Parish St. Joseph Church, 302 5th Street S.E., with Father Jake Dunn officiating and visitation taking place one hour prior at the church. Burial will be in Elmwood-St. Joseph Cemetery, Mason City; with military honors conducted by members of the Mason City Veterans.

Veryle was born October 9th, 1927, in Mason City, the son of George E. and Eunice (Burkholder) McLaughlin. Veryle was a graduate of Swaledale High School, the class of 1946. Veryle served in the United States Army during the Korean War. He was honorably discharged in 1952.

On March 10, 1951, Veryle was united in marriage to Darlene Groesbeck in Charles City, Iowa; to this union two children were born David and Teri. His work career included Marigold Dairy, Mason City Tent and Awning, Pinkerton Security, and he drove school and city bus for many years until his retirement. Veryle was an avid dancer; he enjoyed square and ballroom dancing! He was a lifetime member of the Moose Lodge, Rockwell Legion, Gallagher Post and a member of Surf Dance Club.

Veryle is preceded in death by his parents; wife Darlene; brother-in-law, Duane Engstler.