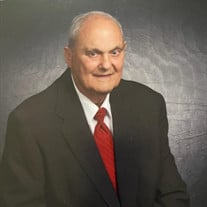 Robert Eugene (Bob) Wilson, 86, passed away from Myelofibrosis, a rare form of leukemia, on October 29th at the Mercy North Iowa Hospice House in Mason City.

Robert Eugene (Bob) Wilson, 86, passed away from Myelofibrosis, a rare form of leukemia, on October 29th at the Mercy North Iowa Hospice House in Mason City.

Visitation and remembrance of Bob’s “Life Well Lived” will be held from 9:00 am to 11:00 am on Saturday November 5th, 2022, followed by a luncheon for friends and family at Hogan-Bremer-Moore Colonial Chapels, 126 3rd St. NE, Mason City, IA 50401. Military Honors for Bob will take place at the funeral home with the Mason City Veterans Honor Guard.

Private inurnment will be at Memorial Park Cemetery in Mason City.

Bob was the son of Nick and Mary (Schumacher) Wilson, and after Nick’s early death when Bob was 6-years old, Mary wed Bob’s step-father, Martin Knudtson.

Bob was a life-long resident of Mason City and attended Holy Family School, graduating in 1954. He was a 3-year basketball letterman for the Maroons state tournament teams.

He served his country in the US Army, Company C, 1st Battle Group, 23rd Infantry, Fort Richardson Alaska during the Cold War.

Returning to Mason City, Bob met, romanced and married Vanita Greiner in 1963 and for 59 years, they worked hard together and shared the joys of life in the same familiar neighborhood in which he grew up.

After working two jobs for many years, Bob decided to use his incredible talent for charming his way into people’s basements and attics and garages, to buy their “junk” and then selling the same to anxious buyers as “antiques”.

Bob was Mason City’s own version of American Pickers, many decades before it was cool.

For over 50-years, Bob made his way buying and selling coins and antiques throughout North Iowa and Southern Minnesota. In recent years, he shared space with son Tom at Collectors Wonderland in Clear Lake.

He was buying and selling and making deals until just a few days ago. Bob was one of those rare and lucky people able to make their living doing the thing that they love to do the most.

Bob is preceded in death by father Nick Wilson in 1942, step-father Martin Knudtson in 1971, mother Mary Wilson-Knudtson, in 1995 and his only sibling, brother-Kenneth Wilson in 2002.