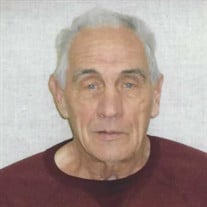 In lieu of flowers memorials and condolences may be sent to Joan Wipf.

Richard was born July 17, 1936, the son of David and Clara (Blackwell) Wipf in the family home in Fairbury, Nebraska. He started school in Bower, Nebraska, and in 1944, Richard’s family moved to Clayton, Kansas; where he finished his education and graduated in 1954. He loved playing basketball all through high school.

Richard worked for Mr. Adams Grocery Store at the age of 12 and also helped area farmers at harvest time. After graduation Richard and his family moved to Lincoln, Nebraska; where he joined the Union and became a carpenter.

In 1956, Richard joined the United States Marines, stationed at Camp Pendleton, in California. Serving his country was always a source of pride for him.

Richard married Janet Sibley to this union 3 children were born, Robin, Richard and Kathy; later their marriage dissolved. On January 17th, 1965, Richard was united in marriage to Joan (Truax) in Lincoln, Nebraska; he became a Step-Father to Tracy and Shelley. Together Richard and Joan to this union their daughter Hollie was born.

He was a Cub Master for the Lincoln School, 4-H leader for Rockwell Rough Riders and coached for Tracy and Hollie’s little league teams. He was President for the Muddy Pond CB Club for many years and past member of the VFW. For several years after retirement Richard was a bus aid for Head Start in Clear Lake.
In his younger years he enjoyed snowmobiling, bowling, dancing and traveling. Richard and Joan bought a motorhome and loved traveling with their grandkids all over the West!