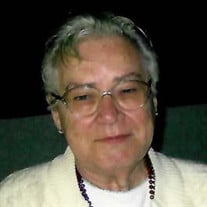 Marlys Rose Bishop, 84, formerly of Rockwell, IA passed away peacefully on Thursday, July 14, 2022 at Oakwood Care Center in Clear Lake, IA. Per her wishes she was cremated and a private burial will take place at Belmond Cemetery in Belmond, IA.

Marlys Rose Bishop (Stiles) was born April 17, 1938 in Missouri to Richard Addison Stiles and Hazel Annabelle Stiles (Garrison). She moved to Mason City IA. as an infant and was raised by her father and later by her step-mother Margaret O. Stiles. Marlys attended school in Mason City. Marlys attended the St Joseph School of Nursing and worked at Mercy Hospital.

She later married Duane Paschka. That marriage ended in divorce. She married Descome Bishop November 13, 1960 and they remained together until his death in 2007. Marlys married James Thompson on October 17, 2019 after a long engagement.

She moved to the Rockwell area in 1960 with Descome and lived on their farm and later in town. She worked at the Rockwell Nursing Home for over 40 years as a licensed CNA. Marlys loved attending local fairs, the Iowa State fair, and all the local events at the small local communities, Buffalo Days, Hobo Days, Tractor Pulls, and the Irish fair. She loved to travel and spend time with family. She enjoyed browsing thrift stores and finding special treasures. She was always fun and in her younger years was active canning, gardening, riding her bicycle and swimming in the Rockwell Community Pool. She loved music her entire life.

Later in life she traveled out west and to Florida and Alabama with her husband Jim and even took an Alaskan Cruise. Marlys was a generous and loving soul and helped out many of her friends and family. She was a Christian and believed in God. She had previously attended the Methodist Church in Rockwell.

The family would like to express gratitude to Oakwood Manor in Clear Lake IA and Hospice of North Iowa for the loving and compassionate care Marlys received in her final days.