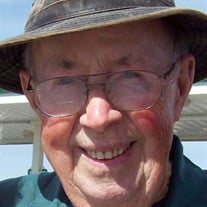 Funeral services will be held, 10:30 am Friday, July 22, 2022 at the First United Methodist Church, 21 3rd ST. NW, Rockford, Iowa. Visitation will be Thursday from 5:00 until 7:00 pm at the church. Officiating will be the Rev. Dennis Burns. Interment will be in Riverside Cemetery, Rockford. Those planning and expression of sympathy may wish to consider memorials to Mercy One North Iowa Hospice (Muse Norris Hospice Unit).

Dale was born on September 19, 1934 the seventh child of Harold and Iva (Schnartz) Fullerton in Rock Falls, Iowa at the telephone office. He graduated from Rockford High School with the class of 1953. He then entered the Army in 1954 and honorable served his county in England. He was discharged in 1956.

In his early years he was an over the road trucker. Meeting his future wife Berniece Smith at a dance in Lowden, Iowa in January of 1963. They were united in marriage on October 26, 1963 in Calamus, Iowa. To this union was born two children Neil and Carla. They lived in Davenport, Iowa until March of 1968 when he purchased his brother Jack’s excavating business after Jack’s death. At the same time he was also employed at the Rockford Light Plant and the Floyd County road department, for a short time until his earth moving business became full time. Dale and Berniece ran the business until 1998 when Neil their son took over. Dale continued to keep his hand in the business for several years, Not to relax, he started delivering motor homes for Winnebago for several years. They thoroughly enjoyed retirement by going to the grandchildren’s, niece and nephews sporting events and traveling.

The family of Dale would very much show their appreciation for Mercy One Hospice for the excellent care given to Dale, and an extra special thank you for showing up to help when needed by Chay, Cory and Dan.