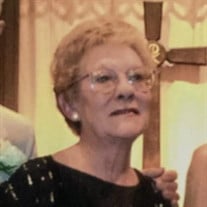 Family suggests memorial contributions to the Walk to End Alzheimer’s in Mason City.

Mary graduated from Charles City High School. She later graduated from Hamilton Business College and attended Mason City Junior College. She worked at Heritage Care Center as an activity director for 25 years. She was an active member of the First Congregational Church as well as the past president of the Board of Trustees. She enjoyed reading and ceramics as well as her computer. She absolutely adored her grandchildren. She loved spending as much time as she could with them.