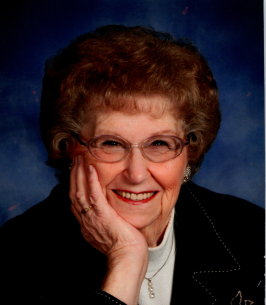 Betty graduated from Fairmont High School in Minnesota in 1947 and then attended National Business Training School in Sioux City.

Betty was united in marriage to John P Frerichs on February 14, 1948. They farmed near Dolliver, Iowa. Five sons were born to the couple. They were the happiest years of her life. Her husband died in 1964 and Betty and her young sons continued to farm for the next five years. Betty began work at Berkley Inc. in Spirit Lake in 1968. In 1969, she moved to Estherville.

In 1971, Betty married Richard H. Holl, who also farmed near Dolliver. Betty and her sons, Daryl and Dale moved to the Holl farm. Richard loved to travel, and Betty promised to travel with him. They went to all 50 of the United States, Canada, Mexico, England, Europe, Jamaica, New Zealand, and Australia. Richard also had four daughters and they visited them often in California, Minnesota, and Iowa. Richard and Betty moved to Spirit Lake in 1980 where “he could be closer to fishing, and she’d be closer to her job.” Richard died in 1990. There were blessed with 19 happy years.
Betty worked Berkley Inc. in Spirit Lake for 24 years. She was an executive secretary and achieved her Certified Professional Secretary rating. She retired in 1992, and then helped her son Dale open his restaurant in Dolliver.

Betty was an active member of Immanuel Lutheran Church. She was also a long-time member of Professional Secretaries International. She loved her grandchildren, enjoyed playing cards, liked to fish and travel often.

Betty is survived by her son Daryl (Diane) Frerichs of Estherville; daughter-in-law, Deena Frerichs of Fairmont, MN; her stepdaughters Linda Ham of Little Canada, MN, Janice McCauley of Kaseville, MN, and Susan (Larry) Loeschen of Estherville. Betty was blessed with 18 grandchildren and many great-grandchildren.

In lieu of flowers, memorials are preferred to Lakes Regional Hospice or Immanuel Lutheran Church of Spirit Lake.