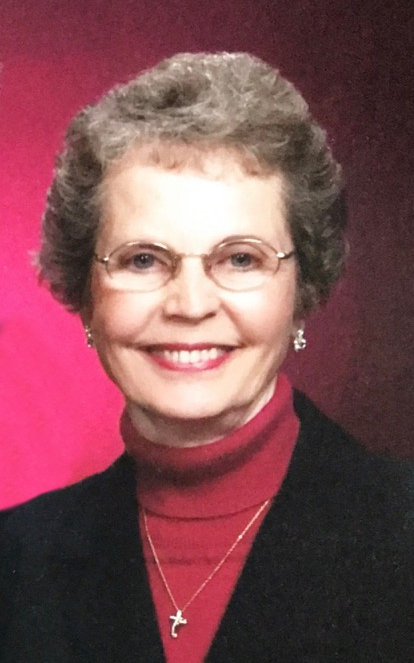 Funeral Mass will be celebrated at 2:00 P.M. on Friday, June 3, 2022, at the Divine Mercy Catholic Parish – St. Cecelia Church. Burial will be in Calvary Cemetery. Visitation will be 4:00 – 7:00 P.M. on Thursday, June 2, 2022, at the Bishop Garrigan School Chapel. With the road construction in front of school there will be parking available on the East side of the school. Funeral Mass will be live-streamed on the Divine Mercy Catholic Parish YouTube page. https://www.youtube.com/watch?v=auv6vvr029Q

Ramona Frances Arndorfer was born February 5, 1937, in Algona, Iowa, the daughter of George and Evelyn (Sheets) Gray. She grew up in the Corwith area where she attended school and graduated from the Corwith High School in 1955.

On August 13, 1955, Ramona was united in marriage to Eugene Arndorfer at St. Mary’s Catholic Church in Corwith. After their marriage they lived near St. Benedict where they began their family. With Gene’s job they moved and spent time in Olivia, MN, and Princeton, IL, before moving back and settling in Algona in 1978. After raising the seven children, Ramona worked part-time at the Chrischilles Store and Merle Norman in Algona.

Ramona’s children, grandchildren and great-grandchild were everything to her and she would do anything for them. She enjoyed her children’s and grandchildren’s many events they participated in, as well as, playing cards and dancing. They also enjoyed traveling and had a memorable trip to Japan to see their son, who was in the military at the time, with President Reagan and his wife, Nancy. They also enjoyed visiting him in Italy when he was stationed there. Ramona was a past member of the Catholic Daughters in St. Benedict and a member of the Divine Mercy Catholic Parish.

Ramona died Tuesday, May 31, 2022, at the Kossuth Regional Health Center in Algona at the age of 85.