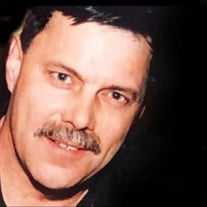 Visitation with viewing will be held Thursday evening, April 7, from 5:00 pm until 7:00 pm at Hogan Bremer Moore Colonial Chapel, and will resume one hour prior to Tom’s service at the funeral home on Friday.

The son of Robert and Lorraine (Luick) Jones, Thomas Ray was born on December 6, 1957. He grew up in Rockwell and attended Rockwell Swaledale high school, where he graduated among the class of 1976. While in high school Tom played basketball and varsity football.

Family was everything to Tom, and on February 28, 1981 he was united in marriage to Susan Gomez at the Rockwell United Methodist Church. Together they would be blessed with four children, Audra, Michael, Robert, and Thomas.

As much as Tom loved being a Father, he was an even better Grandfather. He was his grandchildren’s greatest supporter and attended as many of their activities, athletic and academic, as able. Many memories were made playing ping pong with Tom in the family home.

Tom loved spending time in the outdoors and was known for his love of gardening, fishing and hunting morrel mushrooms from his secret spots in the area. Afterwards, he enjoyed cooking them and sharing them with his family, who swore he was able to make them taste just like chicken!

Always one to keep busy, Tom had worked for Smithfield beginning on December 19, 1983, until his retirement on July 1, 2021. Since then he has kept busy spending as much time as able with his family and tinkering on different projects around his home.

He looked forward to fall each year where he could cheer on the Minnesota Vikings and Iowa Hawkeyes as well as enjoy his annual trip to the Mississippi river to watch the leaves change, which was never complete without a stop at Effigy Mounds in Harper’s Ferry.

Tom will be remembered for his loving heart, his love of a good joke, and making others laugh. He was always the first one there when someone was in need of a helping hand; you could always count on Tom. We truly believe Tom died of a broken heart following the loss of his son, Thomas, in February. But through our own grief we were able to honor Tom’s wish of organ donation and because of his selflessness he will live on through the lives of others.

Those grateful in sharing in his life are his children, Audra (Brian) Paulsen, Mike (Nikki) Jones, and Rob Jones; his daughter in law, Nichole Jones; the mother of his children, Susan Jones; his grandchildren, Nick, Logan, Maverick, Abby, Cruz, Jaylee, Tucker, Xavier, Harlow, and Jaxtyn; his siblings, Barbara (Thomas) Noonan, Peggy (Kurt) Lettow, John (Lorraine) Jones, Jeannette (Brad) Bram, and Mandi McKay; as well as his many nieces, nephews, and extended family members; and his beloved dog, Honey, who has been a constant support to Tom.

He is preceded in death by his parents, Bob and Lorraine; his son, Thomas; brothers, Terry, Dan, and Mickey Jones (in infancy); and his grandparents, Donald and Charlotte Luick and Leo and Alphina Jones.