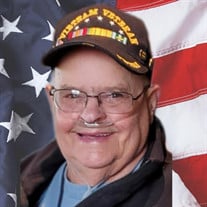 Clarence “Gene” E. Wagler, 81 of Clear Lake passed away Thursday, January 13, 2022 at MercyOne in Des Moines.
A memorial service will be held at a later date.

Clarence Eugene Wagler was born December 5, 1940 in Ottumwa, IA the son of Scott and Ruth (Dodd) Wagler. Through his youth, Gene’s family followed his father in the military, traveling all over the United States, eventually graduating from Bloomfield High School. He continued his education at Northwest Teachers’ College, now Truman College in Kirksville, MO before enlisting into the Air Force. On November 27, 1960 he married the love of his life, Patricia Guinn in Bloomfield. The couple moved to Maine as Gene honorably served in the Air Force in the Strategic Air Command. They were blessed with three children, Julie, Jane and Christian. Following his honorable discharge, he returned to college, graduating in 1966 with his teaching degree. Life took the family all over Iowa following his career, where he was lucky enough to impact countless children’s lives.

Gene and the family returned to Bloomfield, after graduating from Worsham College of Mortuary Science in 1970, to assist his family in running their funeral home, ambulance service and furniture store.

In 1979, Gene and Pat settled in Clear Lake, where Gene would find his niche teaching middle school special education. He was a dedicated listener, and always found time for those who needed him. In Clear Lake he joined the National Guard and spent time in Minnesota teaching and training for them and the US Army.

Gene looked forward to time spent on the lake, whether it was fishing or boating, and was one of the first people in the fishing club. The family took many camping trips over the years, traveling to Minnesota, Wisconsin, South Dakota, and Colorado. Gene took pride in his dedication to the Clear Lake VFW and the Vietnam Vets of America; selling poppies, doing fundraisers and assisting at pancake breakfasts. Most of all, he loved his family and taught them strength through dedication. Gene believed that if you were going to do something, you should do it right and give 110%. One of his special traits was creating laughter.

Preceding him in death are his parents, and a brother, Scott Wagler.