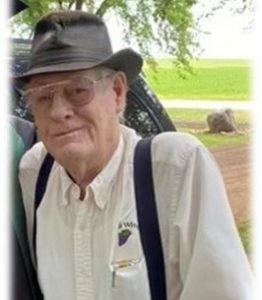 Arthur L. Thompson, was born on December 12, 1936 in Bloomington, Illinois to James O. and Margaret M. (Ziegmann) Thompson. He died on January 10, 2022 at Avera Holy Family Hospital in Estherville, Iowa at the age of 85.

He was united in marriage to Marjorie White on July 2, 1957, at the Catholic Church in Des Moines, Iowa. The couple raised their family in Big Rock, Illinois. He was employed in quality control as an inspector with Caterpillar for 35 years. Upon their retirement they moved to Dolliver, Iowa.

Art enjoyed fishing. He could fix anything. Sharing stories from his time at Cat brought him great joy. Watching old western and action movies filled much of his free time, as well as reading western books by Louis L’amour.