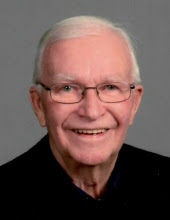 Richard Gates from Cresco, IA went to be with his Lord and Savior December 27, 2021. He passed away peacefully with his wife and family at his side.

Richard Eugene Gates was born in Burr Oak, IA on April 19,1938 to Don and Jeanette Gates. He was known to almost everyone as Dick. As a boy Dick lived with his parents, brothers and sister on a farm northwest of Kendallville.

He attended country school until the eighth grade. In ninth grade he began high school in Cresco, IA and graduated in 1956. Dick was on the wrestling team and wrestled at the Iowa State Tournament. After graduation he moved to Rochester, MN and worked at Rochester Dairy.

He met Carol Grudem from Zumbrota on a blind date where they saw “Gunfight At The OK Corral” at the drive in theater. Carol went home and told her cousin she met the man she was going to marry. She says Dick didn’t stand a chance! Dick and Carol were married in 1959.

Dick and Carol built a house in Rochester and shortly after Mark came along and Matt three years later. In 1964 they moved to a farm by Kendallville, IA and Jenny came the next year. Dick farmed and milked cows. They moved to a farm on the Golden Ridge Road northwest of Cresco, IA in 1971 where they have lived until the present.

Dick farmed and began working for Koster Implement in 1973 where he worked for many years selling John Deere equipment while farming. He had various jobs for a time after that before settling at Wykoff Coop where he was manager for many years before retiring in 2007 at the age of 69. After retirement he worked part time for a neighboring farmer doing field work and driving semi until he was almost 80. He spent a lot of his free time playing golf, which he enjoyed immensely.

Dick was on the church council and was also a lay preacher at St. Paul’s Lutheran Church in Lime Springs. Dick was known as a man of faith. He loved the Lord and had no question about his eternal destination.

Dick was universally liked by everyone who he crossed paths with. He was generous with his time and resources, touching many, many lives during his journey here. He will be greatly missed.

He was preceded in death by his parents Don and Jeanette (Anderson) Gates, brother Larry Gates and brother-in-law Roger Foote.