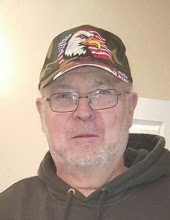 Don was born June 4, 1938 the son of Donald T. and Ruth (Nodland) Hutzell at home in Nora Springs, Iowa. The family then moved to the St. Ansgar area where Don spent his childhood. Don decided to join the United States Army and he enlisted in March of 1957. He served his country until his honorable discharge.

Don loved the wood working trade whether it was building houses, drawing up plans, or repairing anything needing repair for anyone. He enjoyed his family and time spent with them, he knew all his grandchildren and their many activities they were involved in. He looked forward to going on vacation, his annual apple run and leaf tour, riding his motorcycle, cheering on his beloved Chicago Bears, going to the mall to walk or taking a trip to the casino. As a younger man he wouldn’t miss a deer season and the time he got to spend with family and friends hunting. But as anyone who knows Don knows that he really wanted to talk politics.

Donald was a member of the Moose Lodge, the Marble Rock American Legion, and was very involved in the development of the Veterans memorial in Marble Rock. And was a former Marble Rock City Councilman.