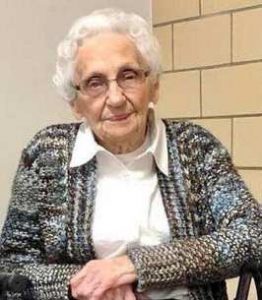 Ruth Raola Zelinsky, daughter of Earl and Charlotte (Singbush) Ferguson was born on November 28, 1919 in an apartment above a retail store in Wallingford, Iowa. She passed away on Friday, December 17, 2021 at Ruthven Community Care Center in Ruthven, Iowa at the age of 102 years.

Ruth was one of 14 students that graduated from Lake Center High School in 1937. She lived with and worked for the Tommy and Hazel Michael’s family while going to school. On June 14, 1941 she was united in marriage to Wilbur Zelinsky in Persia, Iowa. The couple made their home in Terril, where Ruth raised their children. In 1965 the couple purchased the bowling alley in Terril and later the community center, which they operated for about seven years. Ruth became a cook at the Terril School and served the children there for close to 30 years.

Ruth was an active member of Immanuel Lutheran Church in Terril. She faithfully quilted at the church with her church friends for many years. She was also active in the church ladies’ circle. Playing cards with her family brought her great joy, especially games like 500, rummy, and pinochle. Her grandchildren were always happy to see grandma’s sugar cookies and snickerdoodles. She helped with BABES at the schools as well. Ruth enjoyed tending to her flowers, was an avid reader, and enjoyed doing crosswords.

She is preceded in death by her parents; her husband Wilbur; son-in-law Jerry Sorbo; her brothers Tommy (Nola) Ferguson and Bill (Karleen) Ferguson; and her sister Joan (Harry) Hanson.