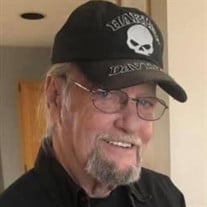 Terry Arnold, age 74, of Gilmore City passed away on Friday October 12, 2021 at his daughter’s home surrounded by his family. Funeral services will be 2 PM Wednesday at Zion Lutheran Church in Humboldt. Burial will be in Union Cemetery with Military Rites conducted by the Iowa Army National Guard Honor Guard, Sather’s Odgaard VFW Post #5240 and American Legion Post #119 of Humboldt. Visitation will be 4:00 – 7:00 PM on Tuesday at the Lentz Funeral Home in Gilmore City. Terry’s services were live streamed on the Lentz Funeral Home Facebook page. https://www.facebook.com/Lentz-Funeral-Home-122511234501273

Terry Wayne Arnold, the son of Joseph Wayne and Marvel (Waters) Arnold, was born on December 14, 1946 in Emmetsburg, Iowa. He attend Havelock Plover School and graduated from Humboldt High School in 1965. Terry enlisted in the U.S. Army in 1969 and retired in 1988. During his service, he was in Vietnam, received the Bronze Star Medal and obtained the rank of Major. After retiring from the Army, Terry worked for Sande Construction and then Chantlands in Humboldt. Terry was a member of ABATE of Iowa, Sather’s Odgaard VFW Post #5240 of Dakota City and the NRA. He enjoyed traveling, golfing, following the Iowa Hawkeyes, attending ABATE and Sturgis. Terry loved spending time with his family and attending his grandchildren’s activities.

Left to cherish Terry’s memory are his children, Kerry (Greg) Anderson of Badger, Kristy (Hoda) Smith of Humboldt, Stacy (Kris) Gilley of Humboldt and Joseph Arnold of Inver Grove Heights, MN; and 8 grandchildren. He was preceded in death by his parents.

The Lentz Funeral Home is serving the family, exclusive provider of Veterans and Family Memorial Care.