FARGO, North Dakota – The UNI women’s basketball team was able to get revenge for last year’s loss, taking a 76-63 win on the road against the North Dakota State Bison.

The Panthers shot almost 50% from the floor on Wednesday, which was one of several factors in their win over the Bison. UNI again scored the majority of their points in the paint with plenty of help from the bench.

“I’m really pleased with the way our girls played tonight.” said Head Coach Tanya Warren. “Getting out to a quick start really made a difference for us in terms of both performance and confidence. The strength of our 3rd quarter helped us close out the game when North Dakota State tried to make a come back. Other than getting in some foul trouble, I thought it was a well-rounded from our team.”

In the first quarter the Panthers would start with a 5-point run, signaling it would be a good offensive night for UNI. The Panthers would keep the Bison scoreless for over four minutes mid-way through the 1st while going on a 9-point scoring run. The two teams would trade baskets before the end of the quarter but UNI would go into the 2nd with a 22-14 lead.

During the second quarter, the Panthers would get the scoring started back up with a layup off a turnover from forward Bre Gunnels. UNI would again hold North Dakota State scoreless for just under 3 minutes in the middle of the second. The Panthers would then have a bit of a dry spell before center Cynthia Wolf would get two at the line. UNI would head into halftime with a double-digit lead of 41-29 while shooting over 53% from the floor.

Karli Rucker would get the second half started with a bang, scoring a 3-pointer less than 30 seconds into the 3rd quarter. The luck behind the arc would continue as guard Kam Finley would get her first 3-pointer of the night off a turnover 3 minutes in. But the Bison would start to get some momentum, going on a 6-point run near the end of the quarter. The third quarter would be the Panthers best shooting of the night, making 8-14 (57.1%) from field goal range, 4-6 (66.7%) from 3-point range, and then 5-6 (83.3%) from the charity stripe.

In the final quarter of the game, UNI spent the first minute and a half scoreless until Finley would make 2 shots at the line. Two more layups would give the Panthers their largest lead of the night at 21 points 2 and a half minutes into the 1st. The teams would then traded baskets back and forth until the Bison were able to make a 7-point run in 3 minutes. Towards the end of the game Finley would foul out in the final minute, but the Panthers would hold on for the 76-63 win.

Individually guard Karli Rucker led the team in scoring with 27 points making 11 field goals and 4 three-point shots. Kam Finley and Emerson Green also scored in double digits for UNI with Green having her best game of the season with 12 points. Defensively, Grace Boffeli led the team in rebounds with 8 while Gunnels had 6.

UP NEXT:
The Panthers return home for an early Saturday game against the Wichita State Shockers. Tipoff is set for 11 a.m. at the McLeod Center. 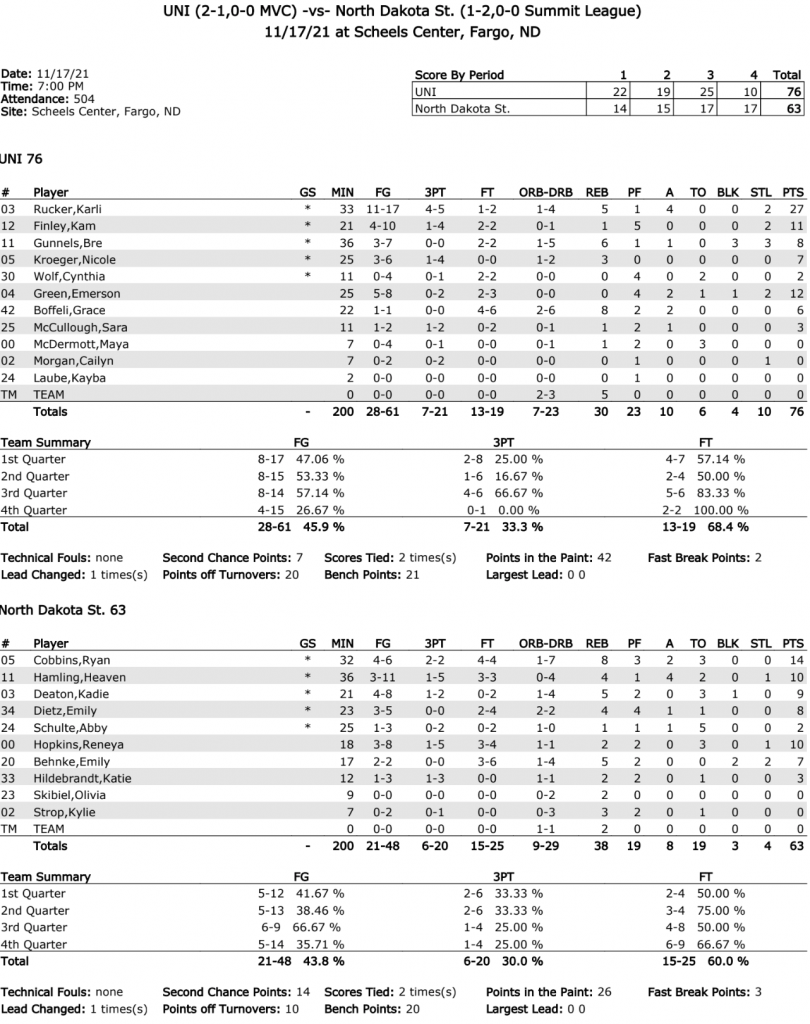