Iowa law enforcement nabs Texas man with woman and her baby, 4 pounds of meth for dealing

This news story was published on November 18, 2021.
Advertise on NIT • Subscribe to NIT

SIOUX CITY – A Texas man has pleaded guilty to federal meth possession in Iowa after cops caught him with 2 young children and 4 pounds of meth in the car he was driving when caught.

Arturo Flores, 23, from Eagle Pass, Texas, was convicted of possession with intent to distribute methamphetamine in November 3, 2021, in federal court in Sioux City.

At the plea hearing, evidence showed that on June 16, 2021, in Sioux City, Iowa, law enforcement conducted a traffic stop on the vehicle Flores was driving. Flores had no identification, but did have a female passenger, her baby, and an 11-year old in the car with him. After a K-9 (drug dog) alerted on the vehicle, law enforcement located and seized over 4 pounds of methamphetamine, wrapped in duct tape, inside a drink cooler on the floor in front of the front passenger’s seat, over $2,000 cash in the passenger’s purse, and a small rock of methamphetamine found in the driver’s side door pocket. Flores admitted that he had acquired the methamphetamine in South Texas and was bringing it to Iowa for further distribution. 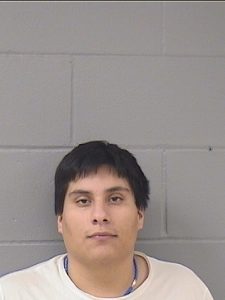 2 Responses to Iowa law enforcement nabs Texas man with woman and her baby, 4 pounds of meth for dealing