DES MOINES – A big second quarter effort turned the tide for No. 14 Iowa State (3-0) as the Cyclones left the Knapp Center with a 98-76 win over Drake (1-2) Thursday night. After being down by double figures early in the second quarter, the Cyclones struck back with a 30-point second quarter and 28-point third quarter to turn the tide of the contest and give ISU the win. The 98 points is the most the Cyclones have ever scored against Drake.

Iowa State was led by Ashley Joens, who put up her 12th career 30-point game with 31 points on 11-of-19 shooting, including five 3-pointers. Joens also posted her 32nd career double-double with 10 rebounds. She was joined in double figures by Aubrey Joens (career-high 18), Lexi Donarski (17), Emily Ryan (13) and Denae Fritz (12).

It was advantage Drake early, as some strong shooting taking the Bulldogs out to a 10-3 advantage three minutes in. The Joens sisters combined to get ISU back into it, with Aubrey getting nine of ISU’s first 11 and Ashley the other two to get ahead 11-10. The visitors were ahead 14-12, but Drake fired off an 11-0 run across a three-minute stretch to build up a nine-point edge.
Down eight to start the second period, the Cyclones saw the Bulldogs get ahead by double figures at 31-20 before beginning a huge second-quarter effort. The Cyclones got back within a pair at 33-31 on a Denae Fritz lay-in and tied it back up at 37-37 on a Morgan Kane bucket. Fritz put ISU ahead again at the next possession and were able to maintain a five-point edge at the break. Iowa State got 30 points in the second, hitting four 3-pointers and making all eight free throw attempts.

Lexi Donarski got the first five points of the half to get the advantage to double figures at 52-42, and it was the size of advantage that ISU was able to maintain throughout the period. Still up 10, ISU raced out to its biggest advantage of the contest with back-to-back 3-pointers from Fritz and Donarski to move ahead 70-54.

Iowa State cruised home from there, Drake got within 11 at 76-65, but the Cyclones were able to bounce back and go on an 11-0 run that took the Cyclone edge into the 20s.

Player of the Game

Ashley Joens. It was a typical all-around effort for the ISU star, who notched her 12th career 30-point game with 31 points and her 32nd career double-double with 10 rebounds. She also had four assists and three steals.

Iowa State returns to Hilton Coliseum on Sunday to take on Southern at Noon. The game will be streamed on Big 12 Now on ESPN+. 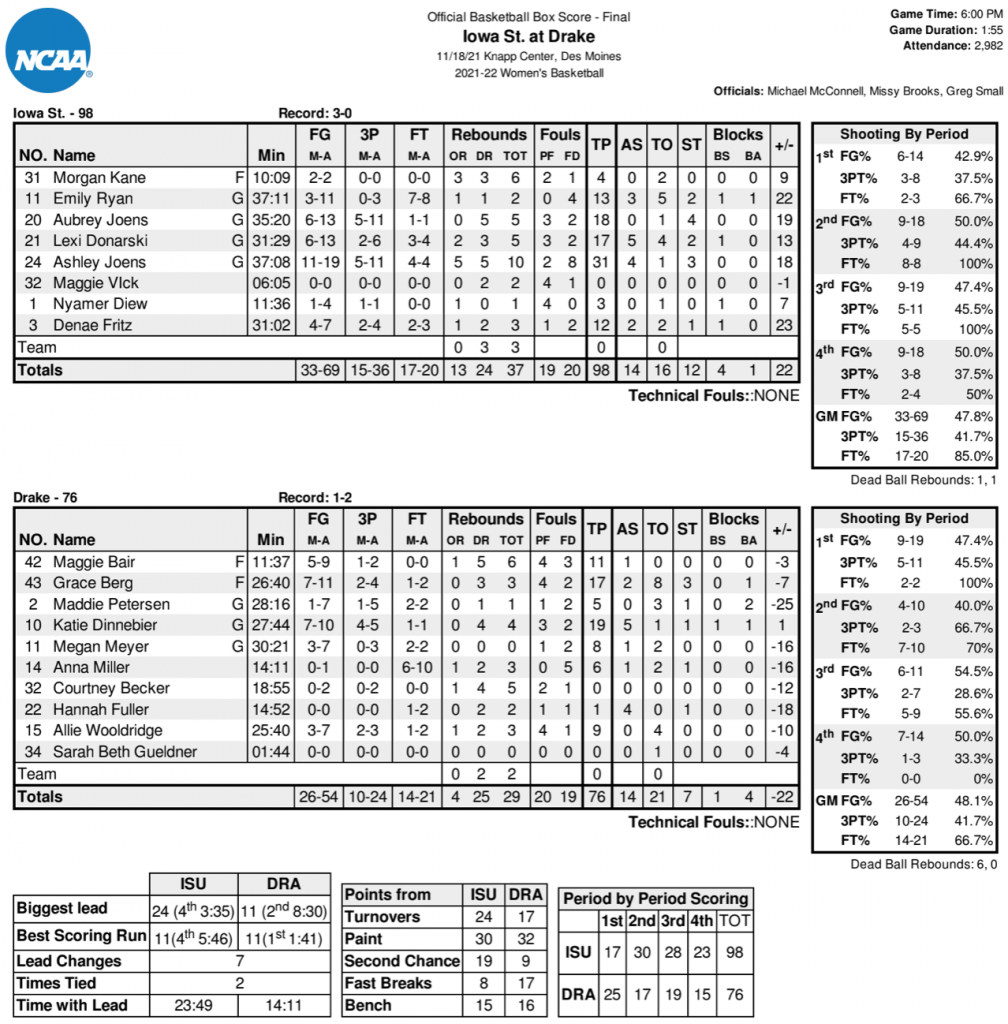