This news story was published on October 21, 2021.
Advertise on NIT • Subscribe to NIT 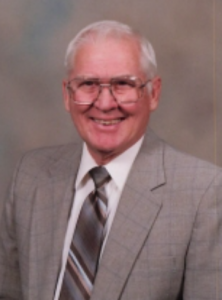 A funeral service will be held on Friday, October 22, 2021, at 10 a.m., at Wesley United Methodist Church, 1405 South Pennsylvania, with Pastor Craig Lutrell officiating.

Memorials may be directed to Wesley United Methodist Church or the Make-a-Wish foundation.

Following graduation, he began teaching and coaching at Treynor Community High School. Five weeks later, he received his draft notice and was inducted into the U.S. Army October 13, after six weeks of teaching. He completed basic training, receiving the “Outstanding Soldier” award of his unit. He graduated from Officers Candidate School at Fort Knox, Kentucky, number 5 of 100, receiving his commission as a Second Lieutenant in September 1951. The remainder of his military career was at Ft. Lewis, Washington with the 44th infantry division, where he oversaw the division faculty, teaching infantry various skills and was then released in October 1953. Following his Army service, Lowell taught at Eddyville Community High School in Eddyville Iowa for three years.

Lowell married Marilyn Stanislaus of Chicago, Illinois on June 2, 1956, and together they enjoyed 65 years of unity and love. They were blessed with three daughters. They began their life together in Mason City as Lowell continued his teaching and coaching for the Mason City School District at Roosevelt Junior High with science and industrial arts. Ten Years later he began teaching at NIACC in 1966 in the physics department and after five years was shifted to the administrative staff as Director of Development where he remained until 1984 when he returned to the classroom. He loved the college students and enjoyed his teaching very much until his retirement in 1990.

Upon retirement, Lowell and Marilyn served as volunteers at Lake Powell in Arizona for the National Park Service, volunteered at the Music Man Square, and in Gardiner Montana for the Gallatin Nation Forest District. Lowell taught Iowa Division of Natural Resources Hunter Safety courses in use of compass and map reading. He enjoyed refurbishing the “Pop- Corn Wagon” in the Music Man Square as well as serving ice cream there. Lowell was inducted into the Iowa High School Hall of Fame for Wrestling officials in 2002. Another high point in his life was being inducted into the University of Northern Iowa’s Wrestling Hall of Fame in 2009, as a member of the 1950 National Team. Lowell was a perfectionist, which showed prominently in his wrestling officiating for the Iowa High School Athletic Association. He was awarded the superior rating and officiated the State Tournament many times.

Lowell had a passion for hunting, especially for deer with good friends, son in laws, and his grandson. He also hunted pheasants with his wife Marilyn and his grandchildren. Lowell’s greatest pride was his beautiful family and he enjoyed visiting with them as much as possible. Anyone who knew Lowell would agree he can fix just about anything and get any job done.
He lived his life to the fullest and will be greatly missed.