This news story was published on September 14, 2021.
Advertise on NIT • Subscribe to NIT 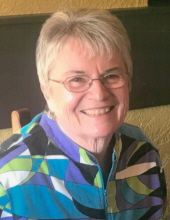 A memorial service for Ruth will be held at 11:00 a.m. on Friday, September 17, 2021 at Trinity United Methodist Church in Charles City. Inurnment will be held at a later date in Indianola, Iowa.

A gathering of family and friends will be held from 5:00 to 7:00 p.m. on Thursday, September 16, 2021 at Hauser Weishaar Funeral Home in Charles City and continue one hour prior to the service on Friday at the church.

Ruth was born on August 31, 1949 in Humboldt, Nebraska to parents John and Marjorie (Wareham) Akers. After completing high school, she attended and graduated from the University of Nebraska at Omaha. Upon graduation she taught high school English, speech and drama for three years in Missouri Valley, Iowa. Three years later, along with her husband, she attended and graduated from Northern Baptist Theological Seminary.

Ruth served in several ministerial and pastoral capacities. She served as minister of youth at Dixon, Illinois, as well as Indianola, Iowa. In Charles City, Ruth assumed the full role of pastor. She also served on regional and national boards for the MidAmerican Baptist Region.

In her later years, Ruth enjoyed photography, looking for eagles and listening to the sound of cardinals singing. She loved being in church, singing her favorite hymns and being with her sisters. Ruth also enjoyed and took pride in watching her children and grandchildren grow up.

In August of 1971 she was united in marriage to Todd Yeaton. To this union two children were born: Rachel and Greg.
Survivors include: husband, Todd Yeaton of Charles City; daughter, Rachel (Richard) Klein of Indianola; son, Greg Yeaton of Des Moines; three grandchildren: Noah, Wyatt, and Jackson Klein of Indianola. Also surviving Ruth are two sisters: Frances (Brian) Peterson of Rapid City, South Dakota and Midge (Mike) Magstadt of Norman Oklahoma; as well as several nieces, nephews, and many, many, friends.

Ruth touched the lives and hearts of many people. She will be greatly missed- but not forgotten.