MAYNARD, IOWA – A man toting meth was nabbed by cops after two motorcycles were stolen in this Northern Iowa region.

On July 2, 2021, at approximately 01:58 AM a Fayette County Deputy noticed suspicious activity on 4th Street South in Maynard, IA. After further investigation, a Black 1994 Kawasaki VN750 Motorcycle was found sideways in the roadway and abandoned. The Deputy then followed footprints into shrubs and trees where Dakota Lee Fratzke, age 23 of Strawberry Point, was located. Fratzke was arrested for Interference with Official Acts (Simple Misdemeanor), Possession of Drug Paraphernalia – 2 counts (Simple Misdemeanors), and Possession of Controlled Substance – Methamphetamine (Serious Misdemeanor).

A further investigation determined Fratzke was also found to be in possession of the Black 1994 Kawasaki VN750 Motorcycle and it was discovered he had stolen another motorcycle for another residence earlier. The owner of the Kawasaki motorcycle was later identified in Maynard and confirmed the motorcycle was stolen. Frantzke was also charged with 2 counts of theft in the 2nd degree class D felonies, along with criminal trespass a serious misdemeanor and other traffic infractions. Fratzke was then transported to the Fayette County Jail where he awaited an initial appearance from a Magistrate Judge. 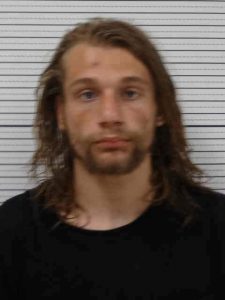 One Response to Meth toter nabbed after theft of two motorcycles