TERRE HAUTE – A historical night for UNI women’s basketball resulted in a 26-point win over the Indiana State Sycamores, 95-69. Megan Maahs is the 26th member of the 1,000-point club and coach Tanya Warren recorded her 250th-career win.

Maahs entered the 1,000-point club with a layup 8:42 left to go in the game. She needed eight points to claim a spot on the list and scored seven in the first 10 minutes. Maahs ended the night with 11 points, five rebounds and two assists.

Warren is the fourth coach in Missouri Valley Conference history who has coached a team to 250 wins and the first at UNI.

Karli Rucker hit a three-pointer on UNI’s first possession and the Panthers never trailed. UNI led 22-19 at the end of the first and 47-36 at the half.

The Panthers went on a 20-11 scoring run in the third put the game out of reach and cruised to the 26-point win.

The Panthers play Indiana State for the second game of the series Saturday, Jan. 23 at 4 p.m. in the Hulman Center.

– Tanya Warren is the fourth coach in MVC history to record 250 career wins.

– Eleven Panthers scored and all 15 Panthers on the roster recorded a stat in the game.

– Maya Gyamfi recorded her first career point. A three-pointer in the second half.

– It is the first game for the Panthers over 90 points in regulation since Last year’s senior night win over Drake. 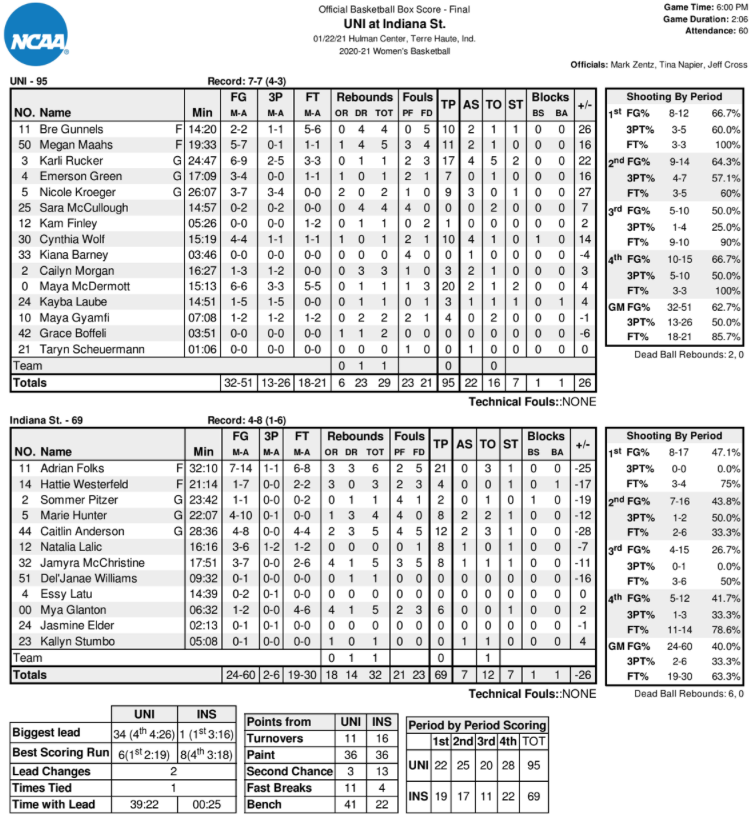