WASHINGTON, D.C. – The Federal Bureau of Investigation’s (FBI) Washington Field Office is seeking the public’s assistance in identifying individuals who made unlawful entry into the United States Capitol Building on January 6, 2021, in Washington, D.C.

Anyone with information regarding these individuals, or anyone who witnessed any unlawful violent actions at the Capitol or near the area, is asked to contact the FBI’s Toll-Free Tipline at 1-800-CALL-FBI (1-800-225-5324) to verbally report tips. You may also submit any information, photos, or videos that could be relevant online at fbi.gov/USCapitol. You may also contact your local FBI office or the nearest American Embassy or Consulate. 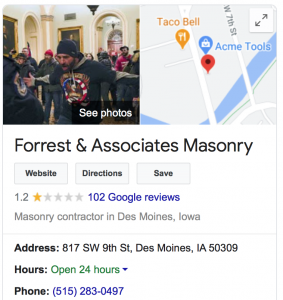 Google screenshot possibly showing an Iowa man who works in Des Moines, inside the nation’s Capitol

Social media is now identifying at least two Iowans who allegedly took part in the madness.  One is a man from Des Moines who is said to work for a masonry business.  KCCI TV station “has confirmed that Doug Jensen, of Des Moines, is an employee of Forrest & Associate Masonry in Des Moines.”  The company’s rating on Google is currently being bombarded with low ratings and has went from over 3 stars to about 1 star this morning.  KCCI and social media posts say Jensen confronted police in the nation’s Capitol building.

The other person being identified is a man from Iowa City who drives for a national ride share company.

One police officer and four other persons died after seditious rioters attacked the nation’s Capitol on January 6 after Donald Trump addressed a frenzied crowd, many of whom were ready for a confrontation. 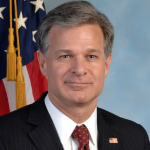 The violence and destruction of property at the U.S. Capitol building yesterday showed a blatant and appalling disregard for our institutions of government and the orderly administration of the democratic process. As we’ve said consistently, we do not tolerate violent agitators and extremists who use the guise of First Amendment-protected activity to incite violence and wreak havoc. Such behavior betrays the values of our democracy. Make no mistake: With our partners, we will hold accountable those who participated in yesterday’s siege of the Capitol.Let me assure the American people the FBI has deployed our full investigative resources and is working closely with our federal, state, and local partners to aggressively pursue those involved in criminal activity during the events of January 6. Our agents and analysts have been hard at work through the night gathering evidence, sharing intelligence, and working with federal prosecutors to bring charges. Members of the public can help by providing tips, information, and videos of illegal activity at fbi.gov/USCapitol. We are determined to find those responsible and ensure justice is served.

This is HORRIFIC to watch pic.twitter.com/AToUyANEY7