This news story was published on March 9, 2020.
Advertise on NIT • Subscribe to NIT

Iowan Todd Blodgett’s newly-published memoir, REPUBLICAN CRACKHEAD, takes readers on such a wild ride that it epitomizes the adage, ‘The Truth is Stranger than Fiction’. What he survived isn’t merely surreal; it’s an amazing, true-life adventure that even the most imaginative screenwriters in Hollywood probably couldn’t invent, even if they tried. REPUBLICAN CRACKHEAD opens with Mr. Blodgett’s idyllic upbringing in north Iowa, where his Republican parents were extensively involved in public matters, including GOP politics. As an 11-year-old, Blodgett became friends with J. Neil Reagan and his wife, Bessie, who – like the Blodgett family – vacationed at Clear Lake’s Outing Club. By 1976, the Reagans had introduced the 15-year-old Blodgett to Neil Reagan’s famous brother, then-California Governor Ronald Reagan. This friendship eventually landed Blodgett a position on Reagan’s White House staff, following his graduation from Drake University. Blodgett later worked for the first President Bush, and the Republican National Committee, in Washington, D.C.

This memoir then takes a dark turn, as during the Clinton years, Blodgett – who admits to having been “greedy” and “opportunistic” – agreed to represent the neo-Nazi profiteer Willis Carto and his racist empire of hatred, of which the Liberty Lobby was its flagship. Initially, Blodgett’s DC-based advertising agency sold ads for Carto’s publications. But by 1996, he began raising funds for Carto’s various organizations, which included a Holocaust-denial group, and assisted Carto in laundering multiple millions of dollars. After a dispute over commissions owed to Blodgett, Carto fired his trusted aide. When Blodgett threatened legal action, Carto transferred stock certificates which represented the controlling interest in the world’s largest, most profitable racist music corporation: Resistance Records, inc. Six months later, another notorious racist, Dr. William L. Pierce, contacted Blodgett, and asked to purchase his shares. Blodgett sold, in a complex, multi-layered transaction with Pierce, his shares in Resistance Records, for what amounted to approximately $380,000.

Complicating matters, Blodgett in late 1998 began smoking crack cocaine, and in early 2000, was recruited by the FBI to work as a full-time, paid informant. Blodgett then began spying on (in his memoir, he refers to his FBI gig as “monitoring”) his former business associates, which included KKK leader David Duke, and scores of other professional and semi-professional haters, some of whom later murdered innocent people. His ‘James Bond’ style work continued for nearly three years, until November of 2002. The plot thickens when, in early 2001, then- President George W. Bush appointed the author’s father, prominent Iowa Republican Dr. Gary Blodgett, to a position in his administration. By this time, Blodgett’s then-wife – who was also from Iowa – began to suspect that his FBI work wasn’t the only cause of the stress in their marriage. But, much like Blodgett’s parents, she had no idea that her husband was spending nearly as much time getting high with junkies in the hoods of DC as he was attending meetings of the Ku Klux Klan and the Aryan Nations, at the behest of the FBI.

This unique memoir, while dark, is often hilarious. I’m still chuckling about how the ever-resourceful, loquacious Blodgett somehow managed to talk his way out of what would have been a violent beatdown by some rough black thugs, who found out that their fellow crack head owned the world’s most profitable racist record company. This author’s close encounters with drug pushers, junkies, white supremacists, and other societal misfits, and the FBI agents, and Republican Senators and Congressmen, are absolutely fascinating.

Blodgett also shares some of his many conversations with Ronald Reagan, including some which took place in the oval office. He also describes how he finally, after seven years of addiction, shed the nasty drug habit that cost him his marriage, his spleen (a drug dealer stabbed him, in a dark DC alley) and over $800,000. If nothing else, these first-hand accounts make Republican Crackhead an intriguing read.

It’s no secret to many north Iowans that Mr. Blodgett, who is a well-known ‘gun nut’ and an NRA Life member, legally carries a loaded handgun. He has been accused, perhaps rightfully, of being somewhat “trigger happy”, and has resorted, at times, to gunplay. Police reports in at least two Iowa communities state that Blodgett has brandished his gun. On one occasion, this occurred while he was being robbed, and another time, when physically threatened. Mr. Blodgett has acknowledged having done so, and is still allowed to carry a firearm, per the concealed-carry permits that he holds, issued by two states that NorthIowaToday.com knows about. We, at this publication, have received phone calls from irate north Iowans who accused Blodgett of pulling his gun on them, which Blodgett unapologetically confirmed were factual accounts. A few years ago, north Iowa community activist Peter J. Children wrote a column in which he described Todd Blodgett as a “gunslinger”. But as this memoir reveals, Blodgett, after being mugged in DC, began packing heat in the nation’s capital, where carrying a firearm is strictly illegal.

This brazen attitude towards laws he opposes is not one of Todd Blodgett’s better attributes. In fact, he actually writes, “I’m not saying everyone should carry a gun and threaten violence to resolve differences with troublemakers. But it’s worked well for me.”

Those troubling views aside, Blodgett deserves credit for being forthright in sharing this story, warts and all, which is truly an incredible read.

Eventually, this privileged Iowa crack head was busted by the DC cops and jailed, for possession of narcotics. That he was able to end his drug usage and remain drug-free speaks well of his determination, and his story is very inspiring. Mr. Blodgett also devotes time to dissuade people from becoming involved with white supremacy, anti-Semitism, and other unacceptable political causes, which the memoir also addresses.

Disclaimer: As the publisher of NorthIowaToday.com, I am personally acquainted with Todd Blodgett. While I do not share his arch-conservative, pro-Trump political views, I have consistently found him to be highly intelligent, straightforward, knowledgeable, and consistently honest. Few people who have been so directly involved in as many nefarious things as Mr. Blodgett would even ever wish to admit to such, let alone write a book detailing them. In my opinion, Todd Blodgett deserves commendation for writing such a compelling, enlightening memoir. Republican Crackhead proves that, sometimes, those who can admit they were wrong are in a good position to help set things right.

On our scale, from one to ten, REPUBLICAN CRACKHEAD has earned a 9-plus, and is available (the Kindle edition) on Amazon.com, BarnesandNoble.com, and other online sources. The hard copy version will be available on March 24, 2020. The Kindle version sells for $2.99, and the hard copy edition for $24.95. 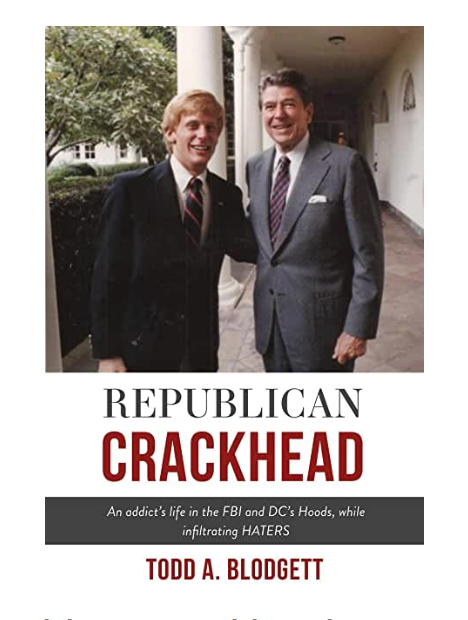