Luka Garza’s free throw with 16:47 remaining in the second half was point No. 700. Garza became the first Hawkeye in program history to register 700 points in a season, breaking John Johnson’s 50-year old record of 699 points in 1970.

Tonight’s loss snaps Iowa’s 13-game home win streak. The 13-game win streak is the second longest in a single-season in Carver-Hawkeye Arena history (17 in 2006). Iowa finishes 14-2 at home this season. The Hawkeyes were the last Big Ten team to lose a conference home game this year.

Tonight was the final home game for seniors Ryan Kriener, Riley Till, and Bakari Evelyn.

Iowa closes out the regular season Sunday at No. 23 Illinois at the State Farm Center (6 p.m. CT) in Champaign, Illinois. 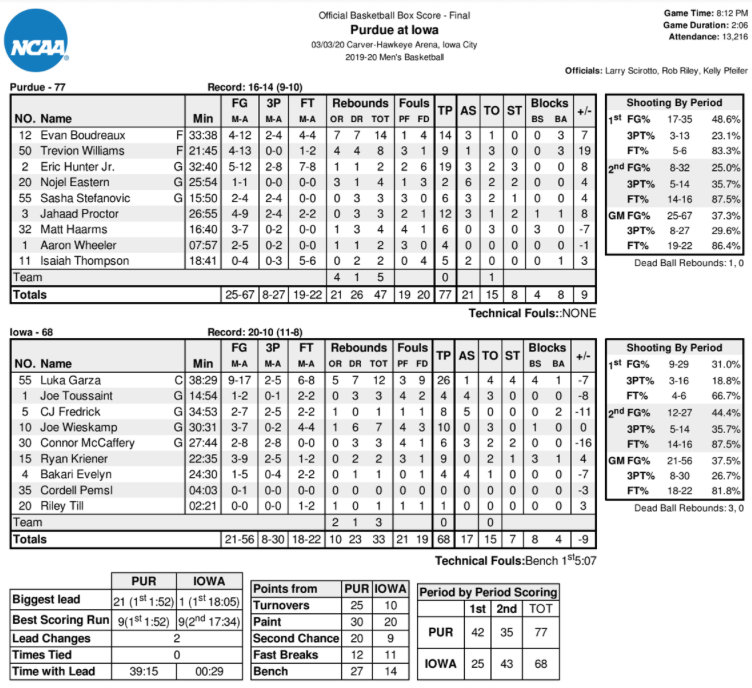 Q. Rebounding from the beginning, just talk about how big of a factor that was.
FRAN McCAFFERY: You know, I think probably the biggest — I think you’re right, Pat. You can’t give up 21 offensive rebounds and expect to win.

But they were just a little bit quicker I think to the ball across the board: loose balls, rebounds.

It’s disappointing, but I think we’ll learn from it. We hung in there.

Q. Can you put your finger on why that is?
FRAN McCAFFERY: No. I don’t think you can say, Okay, it’s one thing. You know, it’s probably an assortment of things. When you look at — we got off to a bad start, which is not what you want. Okay, so now you’re playing a team that’s comfortable shooting the ball, which they were, in the beginning.

So I think they started figuring some things out and they hung in there, they hung together. Seemed to be close to three or four steals, three or four rebounds that we didn’t get, which I think I would’ve maybe changed the momentum a little bit. Would’ve maybe got some fast-break opportunities.

But ultimately I think you have to credit your opponent for playing better and be mature enough to be able to look at this and say, Okay, how do we get better? How do we make sure this doesn’t happen again?

When you give up 21 offensive rebounds, we’re going to get beat. It’s that simple. Again, I’m proud of the guys for how they hung in there and made a couple runs.

Q. (Regarding Ryan starting the second half; just a bigger lineup?
FRAN McCAFFERY: Yeah. Felt like with the way we were giving up rebounds I just thought we needed to go big. I didn’t really want to sit Joe. Wanted get him back in there.

He did some good things. He had a couple goofy turnovers, but I think for the most part he was really battling, some steals. He’s going to fight, you know, to the free throw line.

I just felt like we needed to go bigger.

Q. Haven’t really had to lay into your team much this year. Obviously did early on.
FRAN McCAFFERY: I did early. I did early because I was — if I ever do that it’s always the same, okay? We didn’t execute the things that we had talked about executing. You’re going to miss shots. They’re going to make shots. They give scholarships, too.

So they were four or five things that happened that were very uncharacteristic of our team. I felt like, okay, I got to jump ’em here to get them to focus a little bit better and to lock in. Whether it be who draws offensive rebounding or how we’re defending on a out-of-bounds under in our 2-3 zone, or how we have to score early or late. We’re putting our heads down and driving into packs of people and quick shooting the ball because they’re up eight or nine early.

Those kinds of things are what we talked about not doing. But there is a fine line again, because you want your guys to be confident enough to go make plays, and I encourage them to go make plays.

So can’t encourage them to go make plays and then they go make a play and turn it over and I start yelling at them. If you do that, they’re never going to make a play. So for the most part I won’t do that, but if there are specific things that we talked about that weren’t being executed, now we have a problem.

Now we’ve got to jump them and get everybody’s attention, get everybody locked in together to be better essentially. And they were. So I credit them for figuring that out and being better.

Q. What was the situation with Cordell?
FRAN McCAFFERY: He got hit in the leg, which to be honest with you, I don’t think in and of itself would be a big deal, except that he keeps getting hit in the same spot. It’s like the third or fourth time this happened to him.

So that was the issue. Hopefully he’ll be better by Sunday.

Q. We’ve talked about this a lot. Joe Wieskamp is almost looking for a shot at times. What can you say to…?
FRAN McCAFFERY: I think he’s trying really hard to be a scorer, be a playmaker, do the right thing, do what we need him to do.

While at the same time, they’re up in his space. They’re physical with him off the ball; they’re in his space when he has the ball. So if there is a ball screen they’re jumping into his space either by switch or they’re semi-trapping him until he gives it up.

So he just has to keep working that much harder every time to get a basket. So he’s got a run in transition, he’s got to move without it, and he’s got to sprint into his shot and get off quickly, because they’re just running him off the line every chance they get.

But I think you’re right. At times he does appear to be a little bit hesitant, and I think that’s strictly because he’s an unselfish person. He feels like if I pull here, this guy is up in my face, it’s a lower percentage shot so therefore I’ll just move it on.

Sometimes just go shoot it anyway. We ran a play for him and he came off and I thought he was going to shoot it, and he put his head down and drove it because he thought they were going to run out on him.

Q. Anything specifically that Boudreaux did?
FRAN McCAFFERY: No. Just was relentless, and you got to give the kid credit for that.

Q. In general would you say an uncharacteristic performance? Do you think this is a blip?
FRAN McCAFFERY: Yeah. we’ve had, what, three of these — two of them were against Purdue. We got off to a bad start against DePaul. For the most part we’ll keep fighting. This was a lot better than the last Purdue game. You know, we did some stuff that was good.

And, again, I think you have to — when you lose a game like this you got to give credit to your opponent. They played better than us. They were a little more connected. They got on the glass. They made more shots.

But other than that, I thought we tried to move the ball.