FREDERICKSBURG – A wanted, armed Waterloo man was nabbed in Chickasaw county after driving to his victim’s house who was under a protection order and then fleeing cops once he got there.

On Thursday September 26th, a Chickasaw County Deputy responded to a residence in Fredericksburg to investigate a no-contact order violation. Shortly after the deputy took the initial report, Johnny Lee Harris, Jr. age 31, of Waterloo, drove to Fredericksburg to the protected parties address. Harris also had two active Chickasaw County warrants for his arrest. Deputies attempted to arrest Harris, who fled by vehicle, leading officers on a high-speed chase. Officers involved in the pursuit deployed a tire deflating device, causing the vehicle to become inoperable. Harris attempted to flee pursuing officers, but was apprehended without incident. Harris was transported to the Chickasaw County Jail where he was held until his initial appearance.

Charges filed on Johnny Lee Harris, Jr. are as follows:

In addition to the above charges, Harris was arrested on Chickasaw County warrants for: 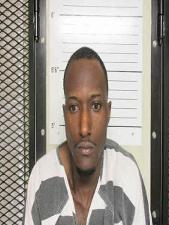