This news story was published on June 25, 2018.
Advertise on NIT • Subscribe to NIT 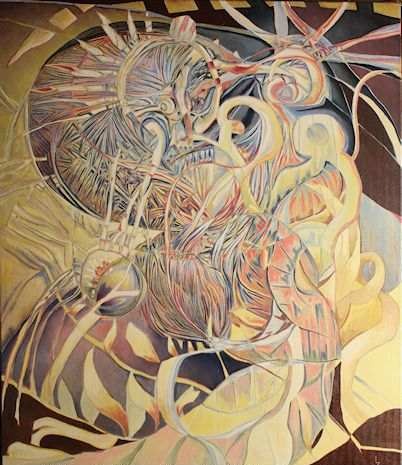 MASON CITY – Participating artists, Museum members, and members of the general public were in attendance on Saturday, June 16, for the opening, awards program, and artist reception for Area Show: 46 at the Charles H. MacNider Art Museum. The exhibition includes a wide variety of artworks created by artists above high school age living within a 100-mile radius of Mason City.

Entering artists were competing for the opportunity to have their work featured in a solo exhibition and for $1,000 in cash awards. The NSB Bank Best in Show award was given to Larry Gregson, of Mason City, Iowa, who will be granted a solo exhibition in 2019, for his oil on herringbone linen piece, Abstraction Series: Stage Five.

Two Merit Awards, each at $100, were given out; one to Dean Genth, of Mason City, Iowa for his fused glass piece, Out Of The Void and one to Claude Bilsborough, of Titonka, Iowa for his oil painting entitled Trapper Dave. The $50 Most Daring Award was presented to Titian Butash, of Austin, Minnesota for her mixed media clay artwork, Magdalene.

Four Honorable Mention awards were handed out as well. The first went to Bob Taylor, of Mason City, Iowa, for his mixed media metal sculpture, Taller than Tree. The second went to Pamala Bergo Coffey, of Mason City, Iowa for her acrylic painting, Nature’s Blast. The third went to Dave K. Young, of Britt, Iowa for his color pencil drawing, Frantic at the Fair. The forth Honorable Mention was awarded to Susan E. Kuennen Massman, of Elgin, Iowa for her basket, Purple Coneflower.

The competition for the show was open to all artists above high school age residing within 100 miles of Mason City, encompassing North Central Iowa and Southern Minnesota. Each entrant was eligible to submit up to two artworks for consideration. This year’s show drew a total of 86 entries by 45 artists. The final exhibition includes 45 artworks by 31 artists.

Many artworks in the exhibition are for sale and can be purchased through the Museum. The exhibition will remain on view in the Museum’s Kinney-Lindstrom Gallery through August 1, 2018. Admission is free and open to the public.