MASON CITY – A Forest City man is guilty of stealing from the Mason City Walmart.

Mason City police were dispatched to the Walmart Super Center store, 4151 4th Street SW, on the afternoon of November 6, 2017 reference an adult male detained for shoplifting. Officers arrived and after an investigation, 26-year-old Jayson Bradwin Dyslin of Forest City was transported to the county jail on a charge of aggravated misdemeanor third-degree theft for attempting to steal merchandise valued up to $1,000.00.

Later, Dyslin entered a guilty plea to a reduced charge of only fifth-degree theft. He was sentenced to 30 days in jail with all but 28 suspended. He must pay $225.00 in fines and court fees. He has also been placed on probation for a year.

Court records show Dyslin faced a felony forgery charge in Kossuth county after a 2015 crime. He later pled guilty to a reduced charge of fifth-degree theft, but still owes the entire $1,509.71 to Iowa courts in that case.

Dyslin was sent to a state prison back in 2013 for violating the probation he was given in a 2010 drug crime he committed in Algona. He served just a fraction of his 5-year prison sentence. 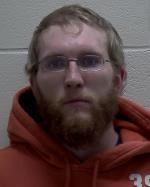 2 Responses to Forest City man guilty of shoplifting at Walmart