Man who tortured cat allegedly exposes himself at apartment complex

MASON CITY – A Mason City man who got a fine for stuffing a cat into a bag and tossing it into a river was arrested this week after police say he exposed himself at a local apartment complex.

Mason City police responded to a call of a sex offense at 8:05 AM Wednesday morning, January 31 at the Regency Apartments, located at 1531 6 Place SE. After an investigation, officers arrested 71-tear-old William Nathan Hill on a serious misdemeanor charge of indecent exposure. It appears he exposed himself at the apartment complex at a nearby apartment to the one he lives in. Hill was taken to jail and quickly released. He is due in court February 16.

Hill was in the news back in 2015. On March 21 of that year, a man and a woman witnessed Hill throw a duffle bag into the Winnebago River at a location near Kentucky Avenue. They went to retrieve the duffle bag and discovered a live cat inside.  Hill continued to walk north on Kentucky Avenue as police were called. Days later, Mason City police announced that they had arrested Hill on a charge of animal torture – an aggravated misdemeanor – in connection with this incident. However, on April 29, Cerro Gordo county prosecutors allowed Hill to plead guilty to a lesser charge of abandonment of animal rather than go to trial and try to win a conviction with seemingly overwhelming evidence in their favor. He paid $235.00 in fines and court fees. Later, “Winnie” the cat was adopted from the Humane Society by a Minnesota man. 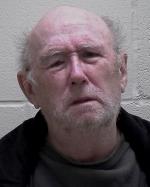