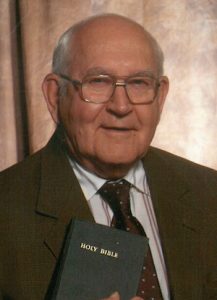 Vernon Reints, 91, of Charles City, passed away Thursday, January 18, 2018 at the 9th Street Chautauqua Guest Home in Charles City with his family by his side.

A funeral service for Vernon Reints will be held 10:30 a.m. Wednesday, January 24, 2018 at St. John’s United Church of Christ (Pleasant Hill Church) near Nashua with Pastor John Cofield officiating. Burial will be at the church cemetery.

Visitation will be at Hauser Funeral Home from 5:00 to 7:00 p.m. Tuesday, January 23, 2018 and will continue one hour before the service at the church on Wednesday.

Vernon Raymond Reints was born March 1, 1926 on the family farm to Abel and Ida (Boerschel) Reints. He attended country school and then graduated from Nashua High School in 1944. Vernon was a member of St. John’s United Church of Christ near Nashua his entire life. He was President of the consistory three different times and on the Board for 12 years. Vernon married Eleanor (Litterer) on August 20, 1948 at St. John’s United Church of Christ. They were married 51 years before Eleanor’s death in 1999 and to this union were born two children: Nancy and Dennis.

Vernon was blessed with his second wife, Ellen (Teepe) Billings, in September of 2000.

Vernon was a farmer for 20 years in Floyd County and when he quit farming began work as a carpenter for two years. He was then hired by Floyd County running the backhoe and also the snow plow in the winter months, retiring after 20 years.

Vernon belonged to the Senior Center for 25 years where he was Past President, served on the Board several years and called BINGO for 15 years. Vernon and both of his wives were very active with the Senior Center and Moose Lodge in Charles City. He enjoyed going to the Old Time Music Jam sessions and playing pool at the Senior Center. Vernon also enjoyed traveling to Alaska, Hawaii, Switzerland and many other places.

He was preceded in death by his parents; first wife, Eleanor (Litterer); son, Dennis Reints; and step-son, Greg Billings.