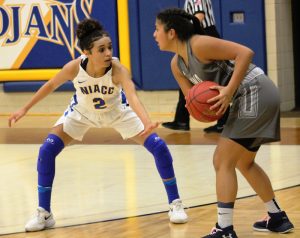 MASON CITY – Freshman Mikayla Homola scored 19 points to lead the No. 7 NIACC women’s basketball team to a 76-67 victory over Iowa Central in an ICCAC contest Saturday afternoon in the NIACC gym.

Sophomore UU Longs scored 17 points and sophomore Taylor Laabs scored 13 points as the Lady Trojans improved to 15-4 overall and 2-1 in the ICCAC.

NIACC, which led 39-32 at the half, led 56-52 after three quarters and outscored Iowa Central 20-15 in the final 10 minutes to push its winning streak to five games over the Tritons.

Khalilah Holloway led the Lady Trojans with eight rebounds. The sophomore is averaging 10 rebounds per game in the three ICCAC contests.

NIACC returns to action at home Wednesday against Ellsworth in an ICCAC contest. Game time is set for 5:30 p.m. in the NIACC gym. Ellsworth stopped Southwestern 57-45 on Saturday.