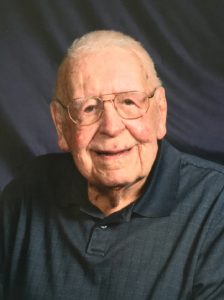 A memorial service will be held Friday, November 10, 2017 at 2:00 pm at Trinity United Methodist Church in Charles City with Pastor Jim Beranek officiating. Visitation will be held at church one hour prior to the service.
John, the son of John L. Sebern and Juanita Downer Sebern, was born April 2, 1925 in Cedar Rapids, Iowa. A gifted athlete, John graduated from Cedar Rapids Roosevelt High School in 1942.

After graduation, at the age of 17, he enlisted in the U.S. Marine Corps as part of the Amphibious Reconnaissance Battalion. He served three years during WWII in the Pacific theater seeing action in Iwo Jima, Tinian, Saipan, Okinawa, and Makin Island. He was awarded a Bronze Star, a Purple Heart, and numerous other medals and ribbons for his courageous service.

After completing his service, John chose to return to Iowa, attending Cornell College in Mt. Vernon, Iowa, where he received his Bachelor Degree in 1949. At Cornell, John was a star athlete as a member of the football, basketball, and track teams all four years. While at Cornell, in anatomy class, he met his future wife, Jean Huxsol of Charles City. They were married in Osage, Iowa on December 22, 1949. They celebrated 67 years together until Jean’s passing on January, 29, 2017.

John began his teaching and coaching career in Tama, Iowa. He also served as Varsity basketball coach at Charles City Immaculate Conception High School from 1958-59. John began his teaching and coaching tenure with the Charles City School District in 1959. He coached numerous Varsity, Junior Varsity, and Junior High teams in football, basketball, track, golf and girls softball over the years. He taught Geography and Social Studies in the Junior High School impacting lives of many students. After 28 years, John retired from teaching in 1987.

John was an active member in the Charles City community, serving on the City Council, Jaycees, Director of the North Iowa American Red Cross during the 1968 tornado, Floyd County Historical Society Board, attended Honor Flight 2009, a founding member of the Big Four Retired Teachers Group and a member of Trinity United Methodist Church.