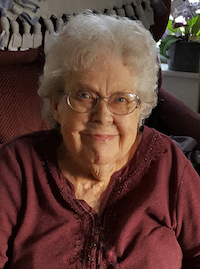 A funeral service for Ruth Duncan will be held 10:30 a.m. Saturday, August 12, 2017 at Saint John Evangelical Lutheran Church in Charles City with Erik Hoefer officiating. Burial will be at Riverside Cemetery in Charles City.

Visitation will be at Hauser Funeral Home from 4:00 to 7:00 p.m. Friday, August 11, 2017 and will continue one hour prior to the funeral service at the church on Saturday.

Ruth Velma (Brinkman) Duncan was born on May 17, 1927 on the family farm in rural Clarkesville, Iowa. She was the fourth child born to Fred and Isabel (Hoffert) Brinkman. Ruth was baptized and confirmed at St. Peter Lutheran Church in Greene, Iowa. She attended country school through the 8th grade and graduated from Greene High School in 1944.

On May 23, 1952, she married the love of her life, William Duncan. Together with his children, Karen and James, they started their family. Their union was blessed with three more daughters: Jane, Sharon and Lori.

Ruth was employed by the former Cedar Valley Hospital and at the Northwestern Bell Telephone Company as a telephone operator. She resigned from the phone company before Sharon was born to become a stay at home Mom. Ruth and Bill farmed for ten years near Bassett, and in 1962 they purchased the grain elevator in Ionia. They operated it until August 1994, when they retired and sold it. Bill and Ruth moved to Riverside Senior in September 2008. Due to declining health, she moved to Cedar Health on May 16, 2017.

Ruth and Bill enjoyed traveling during retirement. They traveled to Hawaii, Jamaica, Switzerland, Norway and Sweden. They enjoyed going to Senior Citizens in Ionia. Ruth was a member of Saint John Evangelical Lutheran Church, Heritage Club and the Moose.

Family was everything to Ruth. She loved attending her grandchildren and great-grandchildren’s’ activities. Her interests included gardening and canning, playing games and cards. Ruth was a very giving person and her last gift was being a tissue donor.