MASON CITY – A wanted Mason City man who snuck away from the Beje Clark halfway house was located by police and chased down with meth in his possession.

On July 22, 2017 at 8:45 AM, Mason City Police Officers were notified that a wanted subject was in the 400 block of South Garfield. When cruisers arrived in the area, the subject fled on foot. Several residents assisted the officers in guiding them to the subject. At 9:33 AM he was located hiding in a utility shed in the 1800 block of Cerro Gordo Way. Arrested was Jack Hovenga, age 19, who has permanent address. Police say Hovenga had two warrants: Escape from Custody ($1,000 bond), and Probation Revocation ($5,000 bond). Officers also charged Hovenga with Possession of Controlled Substance (Meth), Possession of Drug Paraphernalia, and Interference with Official Acts. Hovenga has absconded law enforcement since he left BeJe Clark Residential Facility June 21st.

Hovenga was taken to the Cerro Gordo County Jail and held on $7,000 bond. 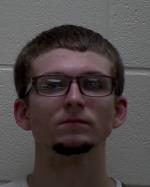