MASON CITY – A Mason City man wanted in connection to a drug crime who is accused of drunk driving last month was caught again this weekend.

A Cerro Gordo county deputy stopped a vehicle at Pennsylvania Avenue and 9th Street NE at about 9:52 PM Friday night, July 21. It was discovered during the investigation that the driver, 18-year-old Dalton Robert Roll was wanted in connection to a marijuana possession crime he committed in 2016 as he failed to appear in court for a probation revocation hearing. Allegedly, when stopped Friday night, Roll was under the influence. He was arrested on the warrant as well as drunk driving, possession of drug paraphernalia, minor consumption and driving while revoked. Roll was arrested June 16 for drunk driving and awaits trial in that case; his license was suspended as he navigates the legal system. He was taken to jail.

According to a report, other passengers in the car were also cited for alcohol violations Friday night. 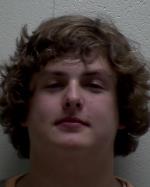