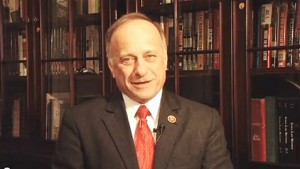 WASHINGTON, D.C. – Congressman Steve King today introduced a resolution calling upon courts within the United Kingdom to allow Charles “Charlie” William Gard, and his mother, Constance Rhoda Kelly Yates, to seek innovative medical care in any country where such care may be available. Charlie Gard is a critically ill, eleven month old child whose parents want the opportunity to bring him to the United States so that he may receive an experimental treatment for his rare genetic condition. Charlie’s parents have raised over $1.6 million to pursue this treatment, and they have received invitations from specialists in the United States and Italy who believe they can assist Charlie.

“It will be a horrific affront to every parent’s innate right to care for their children if British courts refuse to allow Charlie Gard’s parents to pursue offered treatment for their son,” said King. “Congress should pass my resolution and take a firm stand for the rights of parents and for the life of little Charlie. British courts should not be allowed to subject an innocent, eleven month old child to the equivalent of a death sentence when hope for a cure exists, and when his parents wish to pursue it at their own expense. The world is watching this story unfold, and the British legal system is being judged harshly.”

“IN THE HOUSE OF REPRESENTATIVES

Encouraging the courts of the United Kingdom of Great Britain and Northern Ireland to allow Charles William Gard and Constance Rhoda Keely Yates to pursue innovative medical care for their son.

Whereas human life is sacred and deserving of care and preservation at all stages of development;

Whereas a baby is not a statistic to be managed but rather a life, to be supported in every way possible;

Whereas an experimental treatment exists in the United States that could prolong the life of Charles Matthew William Gard (‘‘Charlie’’);

Whereas a hospital in the United States has offered to admit Charlie for such treatment;

Whereas President Donald J. Trump, moved by Charlie’s struggle, has extended a hand of help to his parents from the United States; and

Whereas parents retain an inherent right to protect and provide for their children, and to seek out all resources and services available to secure life-saving treatments, wherever they may be found, for their children: Now, therefore, be it

Resolved, That the courts of the United Kingdom of Great Britain and Northern Island and the European Court of Human Rights should allow Charles William Gard and Constance Rhoda Keely Yates to pursue innovative medical care for their son, Charles Matthew William Gard (‘‘Charlie’’ ), in any country where such care may be available, in order to give Charlie the chance to be cured in accordance with his parents’ wishes.”

In recent days, figures such as President Donald Trump, Vice President Mike Pence, and Pope Francis have expressed their hope that the UK Courts respect the parents’ wishes. Charlie Gard’s parents are pursuing relief before Britain’s High Court, the Court of Appeal, and the Supreme Court of London. To date, the British courts have sided with a determination made by London’s Great Ormond Hospital that the child should die, despite his parent’s desire to seek available treatment elsewhere at their own expense

6 Responses to Steve King wants to save British baby