MASON CITY – A Mason City man will have to deal with federal immigration authorities after a domestic assault incident.

Mason City police were dispatched for a domestic incident after 3 AM on Tuesday, July 11, 2017. Officers arrived at 16 14th Street SE and encountered 34-year-old Leonardo Elivar Trejo. An investigation into the incident led to his arrest on a charge of felony domestic abuse involving strangulation.

Once in the jail, an Immigration and Customs Enforcement (ICE) detainer was put on Trejo. AS NIT has reported previously, the law states that law enforcement agencies ‘shall maintain custody of the alien,’ once an ICE detainer order on a prisoner is issued. ICE detainers are used to make sure that aliens that commit serious crimes are not released back in the public when they should be lawfully deported back to their native countries.

Trejo remains held in the county jail on no bond. 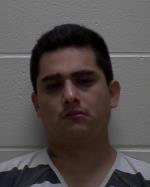