HARDIN COUNTY – An Ankeny man faces a felony charge of sexual abuse after he allegedly groped a woman during a float on the Iowa River.

Travis Eugene Evans, age 27 of Ankeny, Iowa, is accused of third-degree sexual abuse after an incident on July 8, 2017 in Hardin county on the Iowa River. The Iowa Falls Times-Citizen reports that Evans was on the river on a float or tube when he grabbed the woman’s “behind” and then reached around and grabbed her groin area. Apparently, authorities were called and he was arrested and charged with the felony sex abuse crime that same day.

Evans, who lists himself on social media as a retirement specialist at a bank, was released from the Hardin county jail the next day. He will face a hearing on July 21 in Hardin county court. 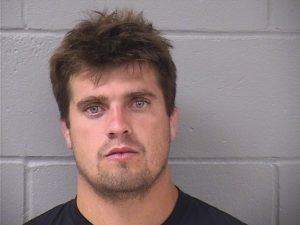 8 Responses to Ankeny man accused of groping woman on river