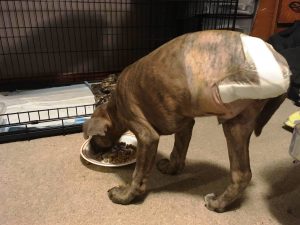 MASON CITY – A few weeks ago, a family came in the Humane Society of North Iowa carrying a young injured pit bull mix puppy. They said they found the dog on the side of the road and that its leg was broken. Assuming he’d been hit by a car and needed help, shelter staff took in the pup and named him Leroy.

The pup was taken to a local vet’s office for x-rays. The vet’s office said they received a call earlier that morning from a woman claiming her pit bull mix pup broke its leg. She told them she couldn’t afford to provide care for the injured pup. It was presumed that this was the same dog.

The local veterinarian confirmed that Leroy had a severely broken femur bone and recommended orthopedic surgery. It was determined that it was unlikely Leroy was hit by a car as he suffered no other related injuries, rather Leroy was suffering from a blunt force trauma injury. Leroy was given pain medication and kept comfortable while he awaited his surgery at the Iowa State University Veterinary Hospital later in the week.

Meanwhile, another individual came to the shelter claiming Leroy was her dog and that he was stolen from her yard just a few days before his arrival to the shelter. She said she had purchased him and two other dogs from a local man, but didn’t know the seller’s name. She was very distraught at his current condition, but could not afford his care. She signed him over to the Humane Society of North Iowa.

Last week, Leroy went to Ames for surgery to repair his broken femur. After additional x-rays and exams, it was determined that Leroy’s leg injury was beyond repair. His kneecap was completely shattered. Unfortunately, amputation was the only option. Leroy underwent successful amputation surgery to have his left hind leg removed. He is currently doing well and recovering in a local foster home.

The Humane Society of North Iowa chose to share the details of Leroy’s story as a reminder that pet ownership is something that should be taken very seriously. When adding a pet to your family, make sure you are getting it from a shelter, rescue, or reputable breeder. Keep your pet(s) safe by making sure they have a secure place inside and outside your home. And lastly, with just food and general care alone, pet ownership can cost hundreds of dollars annually. Pet owners need to make sure they are in a position to afford their pet’s care and any emergency situations that may arise during the pet’s lifetime.

Leroy has survived his injury and will go on to be a healthy and active 3-legged adult dog. “We may never know the truth about what really happened to Leroy. When he came into the shelter, our options were to repair his injury or humanely euthanize him to end his pain. We felt strongly that this adorable pup’s life was worth saving” said Sybil Soukup, Executive Director of the Humane Society of North Iowa. “We hope our supporters agree with our decision to save Leroy’s life and will make a donation this holiday season and help us continue saving the lives of animals like Leroy,” concluded Soukup.