Cerro Gordo deputies investigated an alleged domestic assault incident on Friday morning, November 4. They arrived at 159 North Westview Drive at about 8:12 AM. There, the found 44-year-old Thomas Bernard Hitchcock and placed him under arrest for aggravated domestic abuse assault.

He remains held in the Cerro Gordo county jail on no bond as he awaits an audience with a judge.

Hitchcock, a convicted felon on forgery charges who has faced numerous drug-related charges in the past, is currently accused by Rockwell police of felony second-degree theft and fourth-degree criminal mischief. He awaits a hearing set for November 10 on those charges. 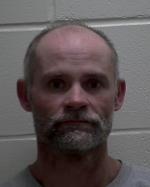