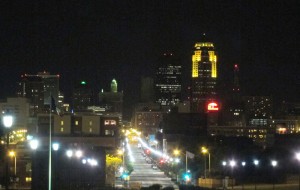 DES MOINES – Donald Trump upstaged the Fox News Republican presidential debate Thursday night, saying he raised millions at his own event while his adversaries fought it out.

As the GOP presidential candidates took to a stage in Des Moines to debate, Donald Trump held a fundraiser for veterans. He pulled out of the Fox News-sponsored debate earlier this week, saying Fox had treated him unfairly.  In true Trump style, he set up his own, competing event, held in the same town at the same time – a fundraiser to raise money for veterans.

Calling it “an unbelievable night in Iowa with our great Veterans,” Trump claimed his event was a smashing success. 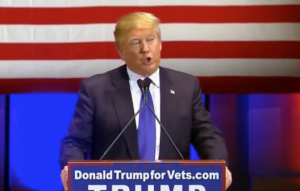 Trump at his event: “This is like the academy awards!” he said.

There were protests at his event, as well, leading to a shouting match between them and Trump supporters.

The main GOP candidates still in the race – except Trump – were at the debate, including Ted Cruz, Marco Rubio, Ben Carson, Jeb Bush, John Kasich and Chris Christie. Much of their debate centered on immigration.

This is the final GOP debate before the Iowa caucuses finally are held Monday, February 1 at 6:30 PM.

Tune in at 9pmE and join me- with my entire family, live from Des Moines, Iowa. We are going to have a great night,…

An unbelievable night in Iowa with our great Veterans! We raised $6,000,000.00 while the politicians talked! #GOPDebate