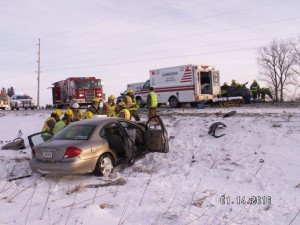 On January 14, 2016 at 7:51 AM, the Fayette County Sheriff’s Office received a 911 report of a two vehicle accident at the intersection of Highway 150 and 190th Street just south of West Union. Once deputies arrived, they requested West Union Fire to bring the jaws for people trapped.

Blanchard was trapped and had to be cut from her vehicle and taken to Palmer Hospital and later airlifted to Mayo in Rochester, Minnesota with serious injuries. Shaffer and her passenger, Shelby Ann Shaffer, age 25 of Oelwein, were taken to Palmer Hospital for treatment of their injuries. Sara Shaffer was later airlifted to Gunderson Hospital in LaCrosse, Wisconsin for treatment of her injuries. 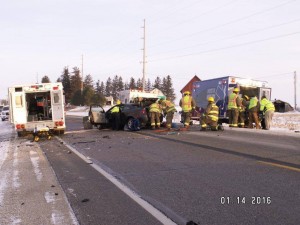 The accident is under investigation at this time.

“Be careful on these cold mornings,” the agency said in a statement. “With the frost overnight, we are getting very slick roadways. We have had some ‘close calls’ recently with folks sliding through some intersections, etc.”