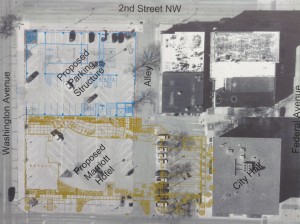 MASON CITY – A parking ramp may be built in downtown Mason City, replacing a public parking lot, and many folks have wondered what the costs will be to park there if it is built.

City administrator Brent Trout gave NIT a run-down of the rates the city is considering to park in the structure:

“People that work or live downtown will be able to lease spots in the new structure for a rate of between $75 to $100 per month. We currently charge $75 a month to lease a spot in our current lot so it will be in this range going forward. If you want to pay daily to park there we will probably charge a $1.00 per hour. However I am looking at providing the first hour parked there for free. I saw this in Iowa City and liked the concept. Since it is free to park on the street right now thought it would be good to offer the first hour free and charge after that. The one hour free will encourage people to park and visit our downtown businesses for short visits. As for the actual eventual rates we plan to study it in greater detail and provide a staff recommendation on rates that council will have to approve at some point.”

The city is considering three concepts for the parking ramp, which would only be built if developer Philip Chodur can convince Marriott Hotels to actually build a hotel. That outcome is not a certainty, despite reporting from the Globe Gazette and comments from elected officials that would lead the public to believe so.