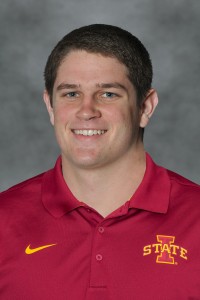 A junior from The Woodlands, Texas, Meyers is sitting out the 2015 football season after being diagnosed with Hodgkin’s lymphoma in February.

Despite not being able to practice and compete for the Cyclones, Meyers has been a frequent visitor on the Iowa State sideline throughout the season. After Iowa State’s season-opening win over UNI, Iowa State head coach Paul Rhoads delivered the game ball to Meyers.

“He’s in the middle of his fight,” Rhoads said. “Fun honor for me to be able to do that to him, for him, and I promise you, there wasn’t a teammate in that locker room that didn’t understand and know that he deserved it.”

Meyers, who recorded 30 tackles and was one of only four Cyclones to start all 12 games in 2014, has received plenty of support in his courageous fight against the disease. Hodgkin’s lymphoma survivor, Kansas City Chief All-Pro safety Eric Berry, reached out to Meyers in October to offer his encouragement.

Just had a great conversation with Eric Berry. He’s an inspiration to not only me but everyone else impacted by cancer.