MASON CITY – Police responded to a dispute in the Cultural Crescent this weekend and arrested a man for a domestic assault.

Mason City police responded to the area of the 000 block of South Delaware Avenue at 1:46 AM on November 30 after a fight between a man and a woman was reported. Officers arrived and after an investigation, placed Donald Roscoe Mason, age 48, under arrest. He was charged with domestic assault and jailed.

Mason was released from Jail Monday pending a court date. 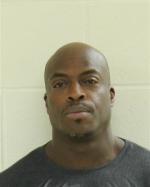